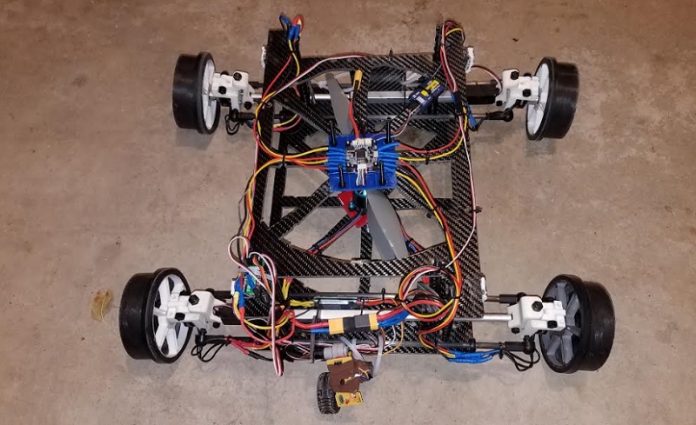 Since I was very young, this engineer and pilot, has been fascinated by flight. The impetus of this Flying Car Drone came from my need to prove to myself and naysayers that it was possible to do. I then created my first proof-of-concept drone in my garage over the next two years, teaching myself how to build, assemble, and program it. There was a lot of trial and error and error and error. Eventually I got it to a point where I could show and prove my idea out.

The drone uses HiMax’s CR3516 motors with contra-rotating blades, centrally located, to produce the main thrust needed to lift the drone. Coaxial shafts rotating the blades in opposite directions will essentially produce a zero net torque on the rest of the carbon fiber body. The CR3516 is powered and controlled with two 40amp ESCs. The four wheels are actually handmade electric ducted fans (EDFs) that control and contribute about a third of the thrust. The drum or “wheel” of the EDF is free to rotate on the shaft when in the drive configuration and is locked and clamped in the flight configuration to prevent spinning. The four racing motors used in the EDFs are Emax’s 1900KV RSII-2206.

Actuonix micro linear electric actuators articulate the wheels into the up and down position and the third electric actuator in front pivots the front two wheels which enables steering utilizing my patent-pending pivoting hinge mechanism.

Forward and reverse power in the drive mode can be achieved with a single drive wheel in back which engages the ground however the future state will include a friction clutch. The friction clutch is essentially a bearing attached to a servo that slides on the wheel motor shaft and engages the wheel. This powers a wheel forward on one side to move forward and another clutch powers reverse on the other side to go in reverse. This dual purpose configuration allows the EDF motors to supply power for flight and drive mode.

In the flying mode the drone flies like a quadcopter and is controlled with a Flycolor X-Tower, multi-rotor ESC flight controller. This gives the drone the stability and control that it needs.

A possible future iteration will allow the wheels to pitch forward to give the craft forward thrust similar to the V-22 Osprey aircraft’s nacelle design. The drone body would be streamlined and more enclosed to utilize the “lifting body” or “flying wing” concept similar to the B2 bomber to provide lift and save power for longer flights. Of course a camera and all the other bells and whistles can be added to the flight controller later as well.

Since this is just a rough proof-of-concept design there are many iterations, improvements, and optimizations that would need to be done long before it could ever meet the market place. I would need to partner with someone that could help in that regard. In the meantime the neighbor kids think I am the coolest dad on the street. Who knows someday this concept could be scalable for those kids. It’s fun to think about anyways.

© Copyright 2014-2019 First Quadcopter. All Rights Reserved.
First Quadcopter and third-party cookies are present in order to enhance your browsing experience, analyze and measure your engagement with our content. We'll assume you're OK with this Accept Reject, but you can opt-out if you wish. Of course according to GDPR you can withdraw your consent at any time. Read More
Privacy Policy