Today, we will have an in-depth comparison of two Xiaomi FIMI drones. The new X8 MINI was announced in March 2021 and will be available in two versions. While the ‘Pro’ weights 245 grams and has up to 31minutes of flight time, the ‘Standard’ has 258 grams and 30 minutes of battery life. In contrast, the X8 SE 2020 weighs 765 grams and has a flight autonomy of up to 35 minutes.

At a glance, the biggest advantage of the FIMI MINI Pro over its older brother is its reduced weight. In most countries (including the US), drones under 0.55 lbs (250 grams) can be used without registration.

In the table below, I compared the most important specs of these two Xiaomi FIMI drones. I highlighted red where the small X8 MINI excels and blue where the bigger X8 SE shines.

Both drones come equipped with a 3-axis mechanically stabilized UHD camera that is capable of recording 4K videos with up to 30 fps. At the highest resolution, the max bitrate is 100Mbps. Both FIMI drones can take 12MP still photos in JPG or RAW formats.

Both FIMI drones come packed with a similar remote controller. The phone can be inserted between the handlers. Both feature the same proprietary TDMA communication that provides up to an 8KM range.

As said at the beginning of my comparison article, the X8 MINI has 31 minutes of battery life and the X8SE2020 35 minutes. The extra 4min of a fun time is due to the much higher capacity battery. While the FIMI MINI is powered by a 2s/2250mAh battery, the X8SE by a 3s/4500 mAh LIPO pack.

Personally, I like the smaller size of the FIMI MINI Pro. If you travel a lot, you will appreciate it that fits in almost any backpack. It has an excellent battery life and the flight range of the 3 times heavier brother.

On the other hand, If you live on an ocean coast with strong winds, you should consider the more powerful FIMI X8 2020. It has level 6 vs level 5 wind resistance. The top speed of the X8 SE is also higher compared to the FIMI MINI. 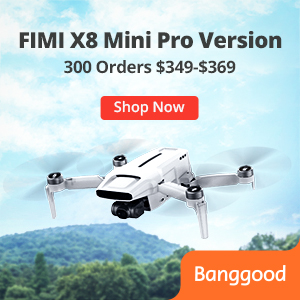