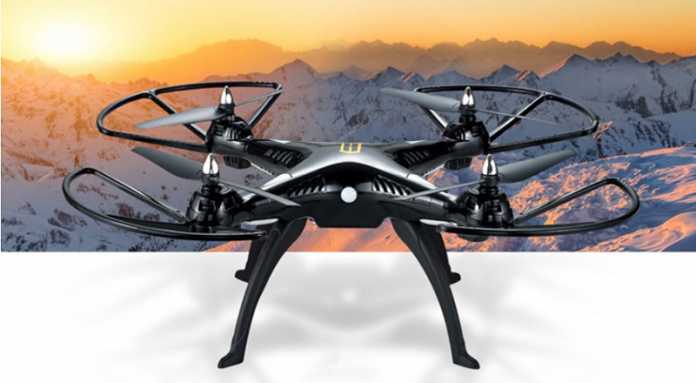 Just returned from my one week holiday I started to look for new quadcopters and I came across this Huanqi H899 drone.

The manufacturer advertises this model to be powerful enough to lift GoPro and alike action cameras. Of course, this can be possible but frankly I would not have the confidence to hang my $ 450 GoPro Hero 4 Black camera on this cheap $ 75 RC toy.

Currently there are two variants of the Huanqi H899 on the market. The more expensive one ($ 103) is delivered with a 5MP camera with WiFi FPV support.

In terms of size, specs and features this new model is very similar with the Syma X8W quadcopter. Unfortunately it does not feature altitude hold like the latest Syma model, the X8HW.

Powered by a high capacity Li-Po battery (2000 mAh), the advertised flight autonomy is up to 11 minutes. In my opinion this can be dramatically decreased if it is equipped with a 84 g camera like the GoPro Hero 4 Silver.

The package of the Huanqi H899 quad is very generous and also includes a smart phone holder and a camera mount. According to the specs, the camera mount is suitable for many action cameras (GoPro 3, GoPro 4, SJ4000, SJ5000, SJ7000 and Xiaomi Yi ).

Images with the Huanqi H899 drone