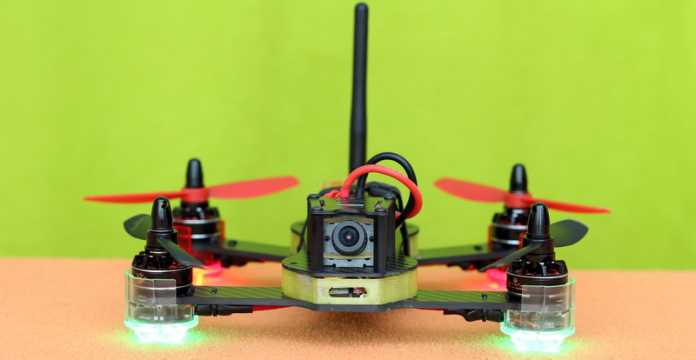 As this summer I’m planing to organize some drone racing with my friends, I started to look for cheap racing quadcopters. I do not want to lend them my precious Walkera racing quads, if it crashes at least it is done by my hand. Among the wide variety of racing drones I found very attractive this REDCON Phoenix 210 ARF (almost ready to fly) kit. Firstly, it is pretty cheap, so it’s perfectly suitable for newbies, as most of my friends are. Secondly, it is available in 5 different colors so it would be more easy to distinguish which quad is yours.

In my opinion, newbies should practice always with cheap models like this REDCON Phoenix 210, not versatile and expensive ones like the Walkera Runner 250 Advanced. Learning always costs but it depends on you how much :)

The difference between a RTF (ready-to-fly) and ARF package is that the second needs some additional “need to complete” parts before you can start flying. Usually, this can be the battery, transmitter or both, like in case of this Phoenix 210. This is not necessary a disadvantage because you can use it with any of your transmitter that you already own and you are already familiarized with. For example, when I ordered mine I knew it that I will pair it with my Flysky FS-i6A transmitter.

After I accepted for review the REDCON Phoenix 210 I found out on the RcGroups forum that I have to do some modifications on it. Frankly, I didn’t liked the idea that a brand new product requires soldering and other hacks in order to be able to fly it.

BTW, this racing quad is advertised to be available in two variants, with CC3D or Naze3 flight controller.

I received this Phoenix 210 quad together with the Walkera F210, which I already reviewed last week. I must give thanks to Elliot from GearBest for offering these two racers. We had a good collaboration over the last year which ends now. I will not say “unfortunately” because he was promoted, so good luck Elliot with your new job!

I should point out that my reviews reflect exclusively my personal thoughts about the products and that I do not to accept to be influenced in any specific way by the sponsors.

The Redcon’s box is surprisingly small for a fully assembled quadcopter. As I previously mentioned, there are not included the transmitter, receiver and battery. Besides the quad, I found inside the box only few accessories (receiver wires, 1 set of propellers and a 5.8G rubber duck antenna). The manufacturer must be very stingy because he didn’t included a 1$ battery Velcro strap or a set of spare propellers.

If you are new into this domain you will be scared by the initial setup because there is no instruction guide included in the box.

On first impression everything looked good and I didn’t have the impression of a cheap product. The carbon fiber air-frame looks pretty solid, between the upper and lower frame there is a 3D printed plastic separator. Unfortunately, the motor protectors, which are also the landing gears, are made of plastic. 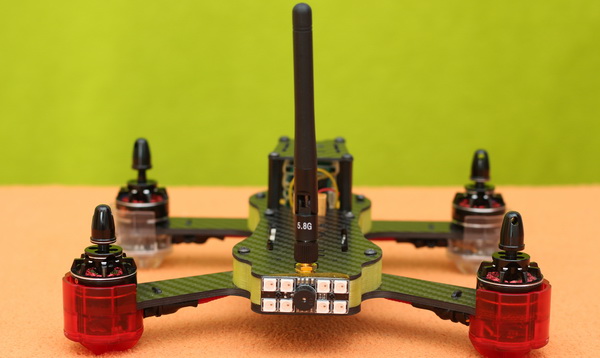 In the rear part of the quad there is a nice status LEDs bar which is mainly useless if you’re not taking the effort to configure it through the CleanFlight APP.

Above the frontal 800 TVL camera there is a camera mounting plate which allowed me to install my RunCam 2 camera in order to record the journey of my flights (at least I hoped so).

Inside the frame, almost every square cm is used without having room for my FlySky FS-IA6 receiver. I also had difficulty to install on the top of the aircraft a 2200 mAh battery which proved to be too long so I had to order a smaller 3S 1500 mAh one (7.2 x 3.7 x 2.8 cm).

According to the seller’s specs, the REDCON Phoenix 210 can be powered by 3s either by 4s Li-Po’s. This is good because higher voltage will allow more throttle punch. Being afraid to see smoke, I test it only for short time with a 4s Li-Po and good news, it survived :)

The problems stated after I connected my 6CH receiver to the CCD3 flight controller with the included servo cable and I power it ON. I have tried in every way to arm the motors but without any success. I had to go back to “uncle “Google to search what can be the problem and I found out that FC is set by default to permanent disarmed as safety measure.

Using the LibrePilot GCS (OpenPilot) APP, after I ran the initial configuration wizards (both airplane and transmitter), I managed to arm the motors. Being enthusiast that finally I succeeded to bring out some noise from this quad, I pushed the throttle stick up, the quad lifted off the ground about 10 cm and then made a heart attack tumbling. I broke one propeller (that I successfully glue it back) and the FPV antenna. After few more tries I realized that there is something wrong with the setup. I went back to RC Groups forum where I found out that the flight controller is stupidly orientated CW 90 degree by default. I quickly checked the arrow on the CC3D and it was orientated to right instead of ahead.

Luckily, LibrePilot allows to set the orientation of the FC. I had two options: to set the YAW to -90°, were pitch was good but roll reversed, or set the YAW to +90° were roll was OK but pitch is reversed. In this point I reached the limit of despair but I got a good tip from Seby that I can reverse one channel on the transmitter, which solved the problem.

Surely, it was much harder to get this damn quad 1 meter above the ground then build entirely my F450 Quadcopter almost from scratch. Usually, it is fun building or mod my toys but this time it was full of frustration because nothing seemed to have success…

Next day after I finally managed to setup my Phoenix 210, I went out for some test flights. Initially, everything seemed OK except the wobbling but, after few circles, the quad started to behave crazily and crashed. No major damages except that two motors sounded strange, probably I should replace the bearings. Hopefully the wobbling can be removed with some PID tuning. Being extremely sensitive to my controls, I wonder whether this quad is not set by default to “Acro” mode.

After I will manage to fix the above issues (adjust the optimal PID and replace the bearings) I will update my review with the flight performances of this REDCON Phoenix 210 racing drone.

When I received this Phoenix 210 quad and peeked inside the box, I observed the solid build quality of the frame and I was convinced that it will be a great racer.
Then it came the cold shower. Till now, this was my “hardest” review, I lost many hours with research and tries to get this damn thing in the air. Anyway, I read that other fellows are very satisfied with the speed and the maneuverability of this quad.
It is possible that only mine had so many problems but, taking into consideration this fact, I absolutely don’t recommend this REDCON Phoenix 210 quadcopter for newbies.

After all the above, if you are still interested to give it a try with this quad, you can find it on GearBest website here. You can opt between red, yellow and pink colors. For the battery I recommend to look out for a small sized, a 1300-1600 mAh 3 cell one.