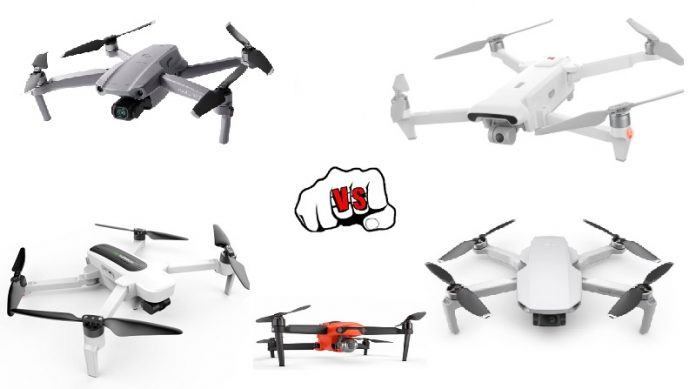 Today, the Mavic Air 2 was officially revealed and most of the leeks and rumors proved to be true. It looks like DJI didn’t manage to keep their secrets as well as in the case of previous release events. Priced for $799, is surely not the most affordable drone out there. Let’s find out what good Mavic Air 2 alternatives are for less money.

Don’t get me wrong, I’m a huge fan of DJI products. Over the last few years, I reviewed most of their new releases (from action cameras, gimbals to drones), but I’ve also realized that they’re no longer the only king in town. In the consumer drones market segment their biggest rivals are Yuneec, Parrot, SkyDio, Xiaomi FiMI, Hubsan, and of course, Autel Robotics.

What makes a drone a good Mavic Air 2 Alternative?

Designed with aerial adventure in mind, portability describes most of DJI’s Mavic series. Thanks to the foldable arms, you can take them with you everywhere. Measuring only 180×97×84 mm, the Mavic Air 2 can fit into almost any size backpack. Featuring active tracking and advanced obstacle avoidance, this gear proved to be the ultimate flying selfie camera. Super smooth 3-axis mechanical image stabilization and 4K video recording are “must-have” features for 2020. A 30 minutes battery life is also very important in order to be able to compete with the Air 2.

In the table below I will try to compare the most important specs of the 3 best Mavic Air 2 alternatives that you can buy in 2020. I highlighted with red were the X8SE excels, with green where the Zino 2 shines and with blue the straightness of the little Mavic Mini. I marked with orange where the MA2 is the clear winner.

Autel claims that their new EVO II is the most capable folding drone on the planet. The EVO 2 series has 3 versions: Basic, Pro, and Dual (8k camera & FLIR thermal camera). The Evo 2 takeoff weight is about 1150 grams and it has a wheelbase of 397 mm. With a starting price of $1495, it is twice as expensive as the Mavic Air 2. Frankly, I don’t know if that 8K camera worth that much.

While the Autel Evo II can fly in level 8 wind conditions on the Beaufort Scale, the Mavic Air can take wind gust of only level 5 (8.5-10.5 m/s). The Evo 2’s max FPV transmission distance is 9 km, unobstructed, and low RC noise using the remote controller with a smartphone connected. This range is close to the one promised by the DJI Mavic Air 2.

Featuring 35 minutes battery life and up to 8 KM flight time, the second generation X8SE is probably the best Mavic Air alternative which you can buy right now. Moreover, it comes with a much more attractive price, being about half the price. From the savings you made, you can buy a couple of spare batteries and other accessories or even book a city break as the borders reopens after the end of the Covid-19 pandemic.

There is some serious flying tech crammed in, it has a dual satellite positioning system (GPS and GLONASS) alongside optical flow sensors for super-precise flying indoors or outdoor

Where the Xiaomi FiMI X8 SE 2020 fails against the Mavic Air 2 is its camera performance and lack of an obstacle avoidance system. While the X8SE’s camera is capable to record with 4K@30fps or 1080@120fps, the Mavic Air 2 with 4K@60fps or 1080@240fps. The double frame rate allows you to capture some cool cinematic slow-mo footage.

Hubsan has been around for a while in the drone market and have made some excellent budget alternatives. Since launching in December 2019, their Zino 2 drone is continuously out-of-stock at most retailers. This could be due to the high demand or some logistic issues. Like FIMI X8SE, it also features 4K camera and 8KM control range.

The Hubsan Zino 2 is safe for the newbie pilots and advanced enough to keep hobby and most semi-pro photographers happy. It folds down to fit in your backpack easily.

Being powered by a 4s/3800 mAh battery, it has about 33 minutes flight time, which is 2 minutes less of the new DJI Mavic Air 2 has.

The biggest advantage of the Mavic Mini over the Mavic Air 2 is its portability. Weighting only 249 grams you can fly it out of the box without needing FAA registration. At this moment the MM is the cheapest DJI drone that you can buy. Since I reviewed the Mavic Mini I use it almost every weekend, I keep it in my backpack all the time. Thanks to the latest firmware update (V01.00.0500) you are able to manually adjust video settings, which makes a huge difference if you want to use it for professional works.

While the MINI adopts some “Advanced WIFI” transmission, the Air 2 professional-grade Ocusync 2.0 provides a much longer range and superior FPV quality.

With “only” 30 minutes battery life, the Mavic Arya has the worst flight autonomy from all Mavic Air 2 alternatives. Its range is also less than half of the other competitors have.

At the time the SkyDio 2 was announced we all were impressed by its autonomous object tracking system. It was much accurate compared DJI’s ActiveTrack 2.0. I would be curious to see the same test against the Mavic Air 2 which features improved Active Track 3.0.

Thanks to its six cameras system, Skydio 2 has a full 360-degree view on the surrounding world, allowing to safely navigate between trees and other objects. It looks that in aspect the Air 2 remains behind the Skydio 2. 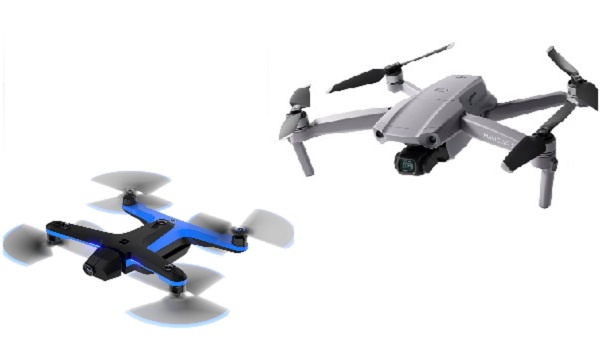 Despite that is powered by a higher capacity 3s/4280 mAh battery, the Skydio 2 has 10 minutes less flight time compared to the DJI Mavic Air 2. The flight range of SD2 is also a third of the MA2.

With a range of up to 9KM and a flight time of 35 minutes, the new Hubsan Zino 2+ is also a serious competitor. Both drones feature 4K@60fps camera with 3-axis mechanical stabilization. Apparently, only the lack of an obstacle avoidance system puts the Zino 2 Plus behind the Mavic Air 2.

To be honest, I like more Hubsan’s transmitter than the DJI’s one. By providing lots of telemetry information (flight distance, flight altitude, and battery level), it’s onboard status screen allows phone-less flying. Also, the external antennas allow to make more easily some range hacks.

I hope I succeeded to give you a bit of an overview for each Mavic Air 2 alternative. I tried to compare the most important specs like flight range and battery life. Before making the final decision you should consider not just the price and features, but also after-sell services like customer support and warranty handling. At this moment, DJI and Xiaomi are the only drone manufacturers that offer paid “Premium care” services.

In a few months, we expect the release of the Mavic 3 Pro, which will surpass the Air 2 in every aspect, including the price of course.