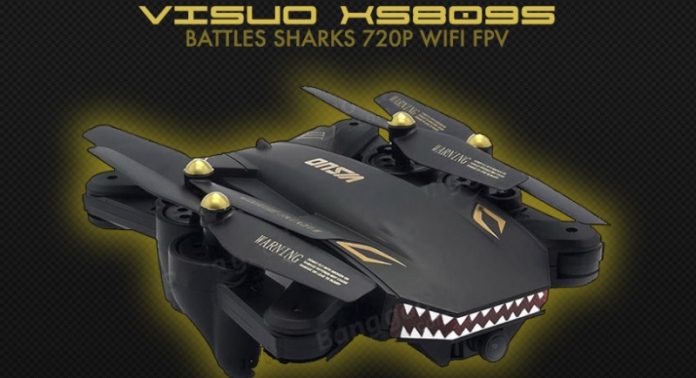 The VISUO XS809S drone was announced with two type of cameras, a basic 0.3MP camera and a more versatile HD camera. The price difference between the two variants is about $7. Both versions are available with 1, 2 or 3 batteries.

Besides visual enhancement, at first look, the biggest improvement of the “Battles Sharks” edition is the flight time. The high capacity, 1800mAh LiPo, allows up to 20 minutes of flight autonomy, probably the longest time on its market segment.

The VISUO XS809S quadcopter features multiple control modes. It can be controlled with the included transmitter or through your smartphone by using virtual sticks or phone’s internal gravity sensor.

During night flights you will be guided by 4 LED lights. Green LEDs in the front and red ones on the rear (one under each motor). An additional red LED bar (shark teeth) in front will help you track the orientation of the aircraft.

For now, the ordering status for the XS809S is “Alert Me On Arrival”. Banggood listed the 720P version in bundle with 3 batteries for $66.99.