Hexacopters like this Fayee FY805 offer greater stability compared to the 4 motor design (or at least it supposed to be). But sadly, each concept has its advantages and disadvantages. More parts mean higher chances of failure. After I received this tiny toy I was curious how it performs so I tested it immediately. I had the misfortune to wreck an engine. I was disturbed by the headless mode and I accidentally hit the wall with the tiny quad. Luckily I could recover a tiny 4 x 12mm motor from another bricked toy and I managed to repair the engine.

Recently there were announced many hexacopters, from small ones to bigger professional ones. In my opinion, this Fayee FY805 is definitely the smallest of them. Is very impressive how they could manufacture it in so extremely small size. Anyway, I don’t know if the extra pair of motors can have any influence on the flight performance considering its size.

Fayee already surprised me with their even smaller FY804 model (JJRC DHD D1 clone), which is probably the world’s tiniest four-motor. 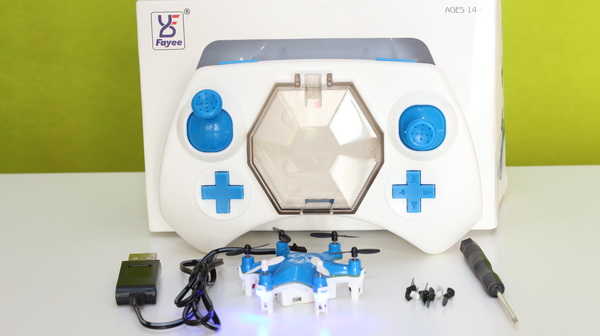 Because my son was very curious to play with a hexa, a accepted immediately Banggood‘s offer to review this tiny Fayee FY805. In order to accomplish his wishes, I also accepted a second bigger hexa from another partner. This month it’s his birthday and I wanted to ask my wife to cook a cake with a quadcopter on the top. I think it’s better if I wouldn’t take the risk to ask, as she’s already desperate because of my hobby and she probably won’t want another multi-rotor in our house :)

I’m already familiarized with mini pocket quads and I love them. They are ingeniously portable and are just perfect for some office relaxing time.

The small package arrived a bit delayed, probably because of the Chinese Spring Festival. The box is labeled with both models FY804 and FY805 and color options (green and blue). I received a blue one, which looks pretty good.

Besides the micro hexacopter and its remote controller, the package includes one sets of spare propellers (2 white + 4 black), a USB battery charger, a screwdriver, and a user manual. Unfortunately there are no blade protectors included in the box.

After I power it ON I was surprised by the colorful LED lights, the Fayee FY805 looks like a cute tiny Christmas tree :). It has totally 6 LEDs, two red in the rear, two blue in the front, and one green on each side. This color-coding helps you to make easy difference between front and rear. When is switched ON, all the LEDs start to flash till the transmitter binds with the drone, and when this is done all LEDs will turn eternally ON. If the headless mode is activated the LEDs start to blink alternately. 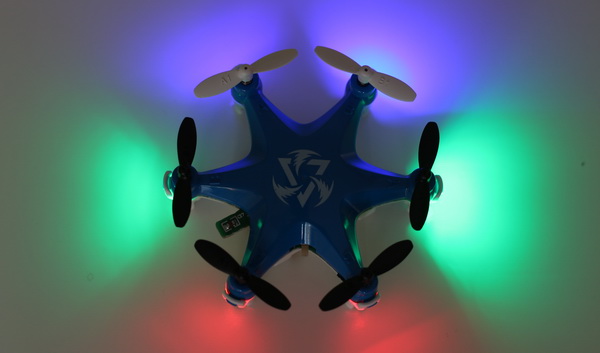 Having six motors, even if they are this tiny (4 x 12 mm), this micro multi-rotor is a bit noisy compared to its size. BTW, it comes ready to fly. You don’t need to make any preparation, just load 3 AAA batteries into the RC, and you are prepared for the first flight.

The built-in 150 mAh battery can be recharged using the included USB charger through any USB socket (computer or smartphone charger).

The smartest thing on little FY805 Navigator is its transmitter which doesn’t just serve to control the aircraft. It can be also used to store and carry the mini hexa.

As usually, the remote controller has two control sticks (thumb pads), throttle and elevator. The top-left button allows to switch between “Low” and “High” speed rates while the top-right button enables the 3D flip mode. For those who are interested to experiment with the headless mode, this mode can be activated by the top toggle switch on the left trim cross.

The advertised control range of the transmitter is about 30 meters,  which is probably quite enough for such a little toy.

As previously mentioned, my first flight took about 5 minutes till I successfully killed one motor. I have to admit that it was a pilot error. Usually, I never use headless mode on any of my toys, but this time I was curious how it works on a hexacopter. The switch somehow confused me and I flew with speed into the wall…

In that short flight I had the chance to test it indoor and I can say that is very stable at “Low” rate. At “High” it behaves a bit strange but seems to have more power.

I managed to replace the broken motor with one that I removed from another toy. It appears that the “surgery” was successful and now it works like new :)

Certainly, I had in my hand better nano flyers but none of them looked so nice in the air like this tiny FY805. My only worry about this model is the lack of spare parts. Anyway, it is so cheap (about $18) that you can buy a second one to keep it as “donor”.

Because Valentines is coming, I can imagine this toy as a gift for big boys :) My recommendation for newbies is that they should practice on large rooms ( at least 5 x 5 m) and always on “Low” speed rate.

Thanks again Banggood for their professional attitude, letting me to review my first micro hexa-copter. 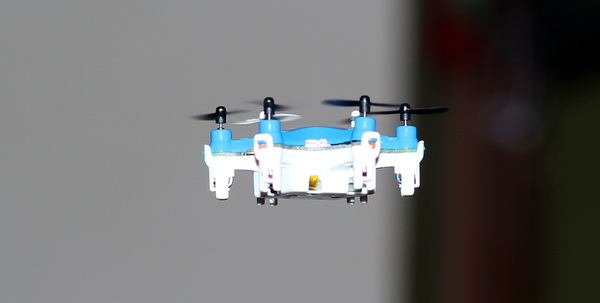