Measuring about only 4.9 x 6.2 x 3 cm, the S9W drone is one of the smallest foldable drone. The small size is paired with an attractive design and all the latest features.

Thanks to the built-in air-pressure sensor, the aircraft is capable to autonomously maintain its flight altitude. This feature is very handy for first-time pilots.

In front of the fuselage is located the 0.3Mp camera which allows to take photos and record video. The on-board camera features WiFi real-time image transmission (FPV). No micro SD slot, the captured files are stored in the smartphone’s memory. 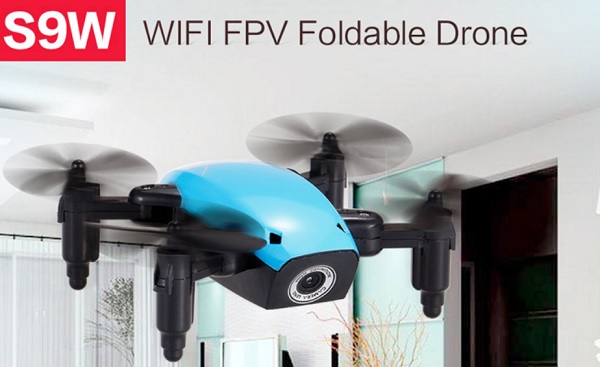 Maybe the included transmitter looks a bit toyish but this is usual for such cheap toy drones. On front panel, beside the usual control sticks and power switch, you can find 8 buttons. While the left shoulder button allows to toggle between Low and High speed rates, the right one enables the 3D flips mode.

If you prefer to control the drone through your mobile device, not a problem. The S9W supports APP control via virtual sticks or smartphone’s gyro sensor (by tilting the phone).

Weighting only 27.5 grams, even if its powered by a 200 mAh Li-Po battery, the S9W drone has a pretty nice flight time, about 7 minutes. According to the specs, the battery is built-in, so you need to rest 40 minutes till next flight while the battery is charging.

What is inside the box?

Now, using the “CSTS9W” coupon code, you can get the S9W toy drone for only $23.99 including free shipping. You can opt between four colors: white, blue, red and yellow.

While Black Friday 2021 itself is on November 26, some of the best deals have traditionally arrived in the days leading up to the big day. So far, the top deals have arrived from Banggood, RCGoing, HGLRC, BetaFPV, GoPro, and other reputable retailers and manufacturers. For sure, after smartphones, photo gears, and game consoles, drones are one of the most popular tech gadgets.

Whether you’re looking for a Christmas present for your kid or maybe a friend or family member that likes high-tech gadgets, some of the best gifts to be given in 2021 are drones. We want to help that the drone you give this year is the right match for your loved one’s expectations and your budget. In our ‘Best Drone for Christmas’ list, we tried to cover the needs of all kinds of pilots and price ranges.