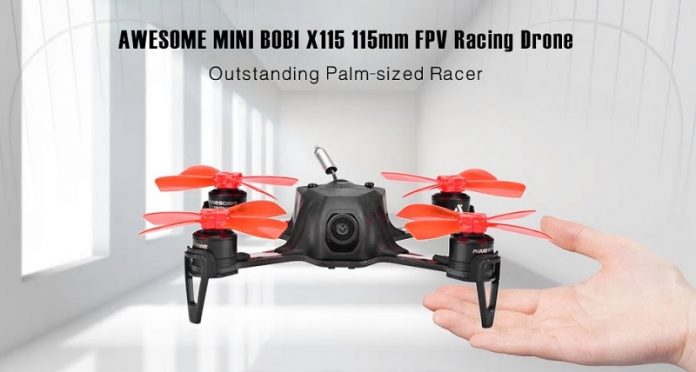 As autumn is already knocking at the door, micro racing drones like this AWESOME MINI BOBI X115 are just perfect for some indoor practice.

Based on the versatile Omnibus F3 Flight controller, the AWESOME MINI BOBI X115 can be configured with multiple flight modes. While newbies can accommodate with the basic flight movements on Angle mode, experienced pilots can have fun on Rate mode. Horizon mode is also available, which is a mix between the previous two mentioned modes.

The lifting power is generated by four pieces of 7000KV brush-less motors and 2.5″ 4-blade propellers.

In order to protect the electronic parts (flight controller, ESC and camera), AWESOME equipped the Mini Bobi X115 with a protective canopy. More than this, they also included a spare one in the package if the initial one gets damaged by too many crashes.