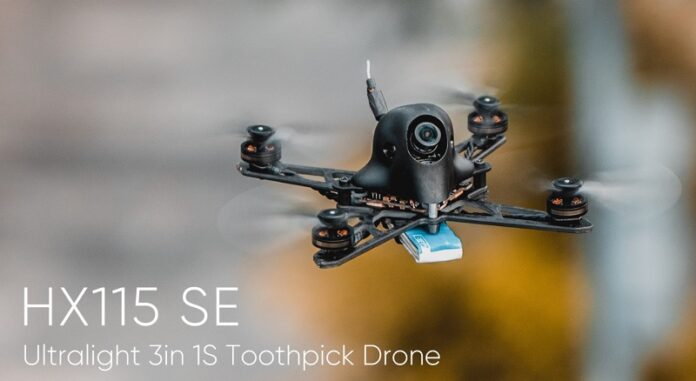 The second generation of BetaFPV HX115 SE has about half the weight of its predecessor (39g vs 75g). Toothpick-style drones are super-light, but powerful FPV drones meant for serious acro outside, in limited spaces, where larger drones would be clumsy.

It is slightly smaller with a wheelbase of just 115mm than the recently reviewed HGLRC Petrel 120X. It also has a protective canopy and adopts 3″ propellers. Its F4 1S AIO flight controller features an integrated 12A ESC and SPI Frsky Receiver. By default, it comes with betaflight_4.2.0 firmware.

The onboard Caddx ANT FPV Camera has 1200TVL horizontal resolution and a 1/3″ CMOS sensor. The camera is optimized for low-light conditions but not has night vision. The BetaFPV A01 5.8GHz FPV transmitter features SmartAudio (remote settings) and adjustable VTX power. According to your needs, you can toggle between Pit-0mW, 25mW, and 200mW modes.