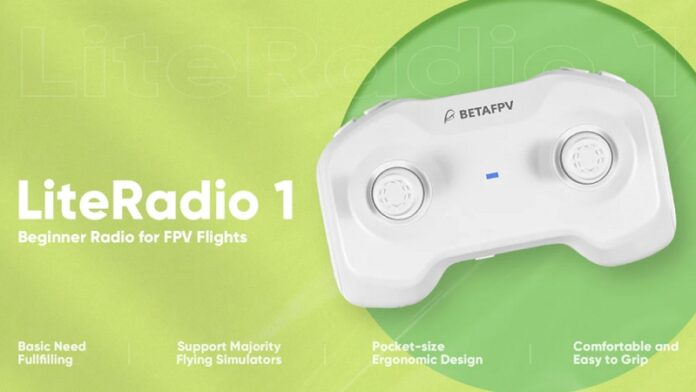 The BetaFPV LiteRadio 1 is a go-to starter radio transmitter for younger ones to join the FPV hobby. LR1 is affordable and perfect for smaller hands. Young adults and children can hold it with comfort. BetaFPV includes two types of sticks end with their new LiteRadio 1 remote controller. While the 10mm versions are perfect for thumb controls, the 16mm for pinch control. The transmitter itself measures about 130*78*57mm.

Priced for only $24.99 USD is probably the cheapest FrSky-enabled radio controller. It supports both FCC (US) and LBT (EU) protocols. Furthermore, it supports USB joysticks mode, which means that beginners can learn and practice through FPV drone simulators before they start a real flight. The RC has four shoulder switches and dedicated micro push buttons for Bind and Setup.

According to the advertised specs, the 3.7 1000mAh battery allows about 8 hours of continuous usage. The removable LIPO can be conveniently charged through the USB Type-C port.

The CC2500 TX module supports 4 different protocols, including Frsky D16 FCC, Frsky D16 LBT, Frsky D8, and Futaba S-FHSS. The current protocol is indicated by the flashing times of the red LED when powered ON, before the buzzer alarm.

How to change the current protocol?