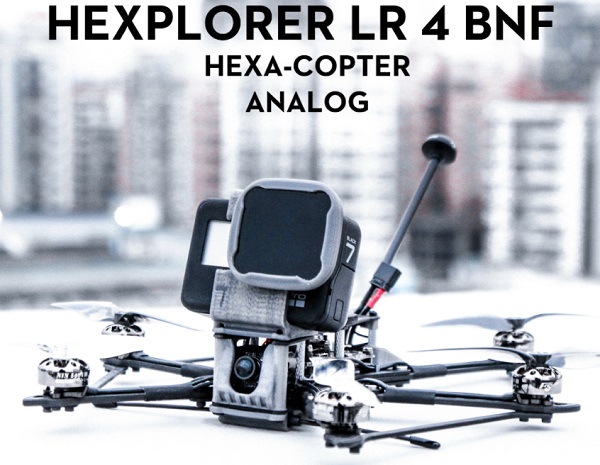 The Flywoo HEXplorer LR is the first Toothpick style hexacopter that comes with a built-in power cable for the SMO 4K camera (Insta360 ONE R Lite). This lightweight 4-inch FPV drone was specially designed for long-range flights. In addition to the onboard GPS positioning, it comes with Flywoo Finder buzzer module which increases the chance of founding your drone in case you crash it in the middle of nowhere.

Despite its compact size, due to its 6-motor design, it has enough power to carry a full-size GoPro camera. For best performance, the manufacturer suggests to power it with a 4s/ 850-1100mAh LIPO battery. 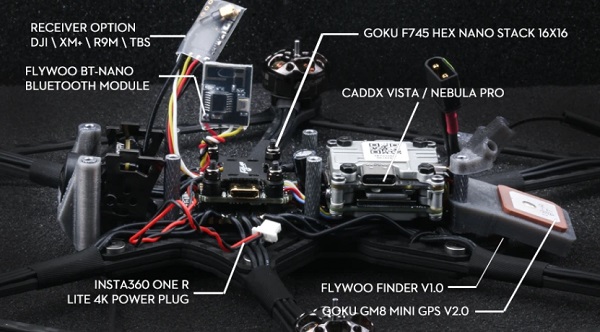 The HEXplorer LR drone is built around the highly-integrated Goku F745 Hex Nano Stack. For improved visibility during night flights, the flight controller comes with four RGB WS2812 LEDs. While the FC has a USB Type-C port for configuration, Flywoo also equipped this long-range hexacopter with a Bluetooth module. This way you can customize flight-parameters right on the field, remotely from your smartphone.

Despite that it was only yesterday officially revealed, there are already few video reviews on YouTube. I know that we can’t trust 100% these sponsored reviews, but when they come from FPV demons like Joshua Bardwell and Albert Kim, at least we should watch them.