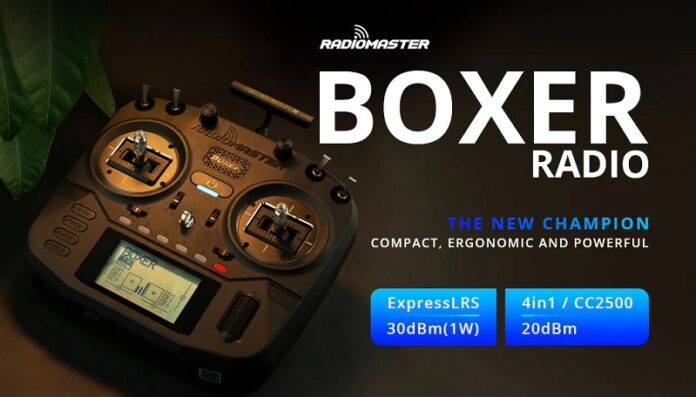 RadioMaster claims that the perfect combination of size and ergonomics make the BOXER an ideal choice for FPV pilots on the go. Featuring full-size hall gimbals for precision control and an intuitive button layout, the RadioMaster BOXER gives you a compact radio without compromising on comfort and function.

In addition to the popular internal 4-in-1 Multi-module (CC2500, NRF24L01, A7105, and CYRF6936) and the CC2500-only version, the BOXER is now also available with a high-power, fan-cooled, 1W internal 2.4GHz ExpressLRS (ELRS) module. Designed to provide reliable long-distance control, minimal latency, and high refresh rates. ELRS is a revolutionary open-source protocol taking the R/C industry by storm.

The RadioMaster Boxer comes with pre-installed EdgeTX, an open-source radio controller software. The transmitter weighs about 530 grams and has a size of 235*178*77mm. It comes with an adjustable and removable T-shape antenna and a industry-first fabric handle. When is powered with a 2S 6200 mAh battery, it can be used continuously for up to 20 hours.

On the front panel, there is a 128*64 Monochrome LCD and two full-size hall gimbals for precision control. It adopts new low-profile latching SE switch and momentary SF switches.

RadioMaster announced the Boxer radio in two versions to comply with FCC and EU LBT RF regulations. Check the supported protocols below: