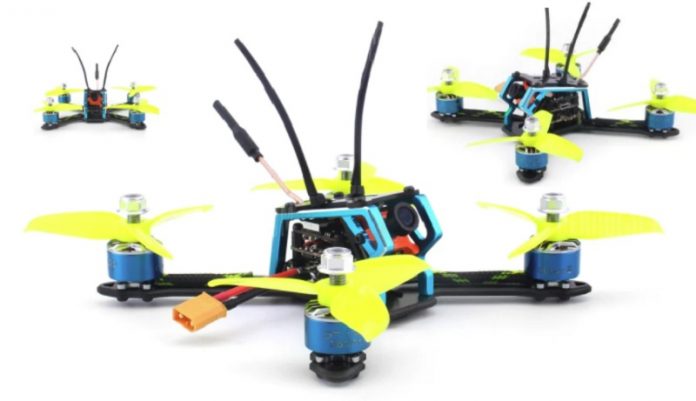 Surely, thanks to its colorful design, the Rcharlance Space Gear drone will be easy to find if you crash it on any type of terrain (snow or high grass). It has cool phosphorescent yellow propellers, orange camera and blue motors. The protective CNC cut aluminium frame is also blue.

Like most FPV quadcopters in 2018, the Rcharlance Space Gear is also based on the versatile Omnibus F4 flight controller. By default, the FC comes flashed with BetaFlight firmware. According to your flight skills you can configure 3 type of flight modes. While newbies can start with Angle and Horizon modes, advanced pilots can have fun with Acro mode.

The 600 TVL camera comes with high quality 1/3″ SONY super HAD II CCD  image sensor and 2.3mm lens (with 130 degree field of view). The angle of the camera can be adjusted according to your flight style.