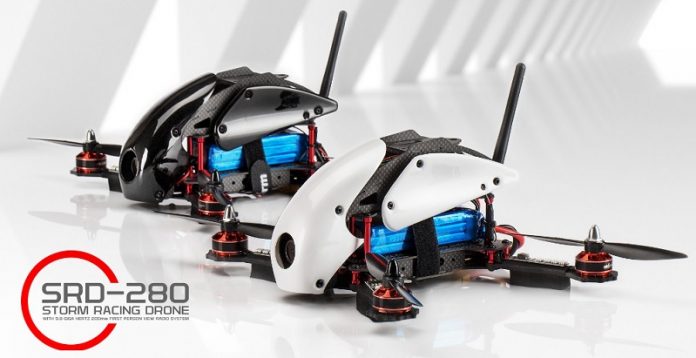 While I was looking for a professional racing quadcopter I came across the HeliPal’s Storm SRD280 (aka RoboCat).

The 4th generation of the Storm SRD280 racing drone comes with the same beautiful design (as its predecessors) but with better flight controller and upgraded propulsion system (motors, ESCs and propellers).

The protective canopy of the Storm SRD280 V4 is not just a plastic shell add-on, it’s actually part of the frame structure. The futuristic canopy is available in many color combinations and painting designs.

On each rear arm there is a programmable 8LED status bar. They will give you a clear view on the position of the aircraft and its main status (of course this feature is handy only during LoS flights). By default, Green is motor locked, Blue is motor unlocked and Red is low battery level.

In case of accidental crashes, the built-in buzzer will help you to find your precious FPV quad more easy (read my fly away tips).

Thanks to the multiple flight modes and speed rates, the Storm racing drone SRD280 is suitable for newbie pilots as well as for the skilled ones.

Through the RadioLink AT9 transmitter’s “G switch” you can toggle between “Angle”, “Horizon” and “Rate” flight modes.