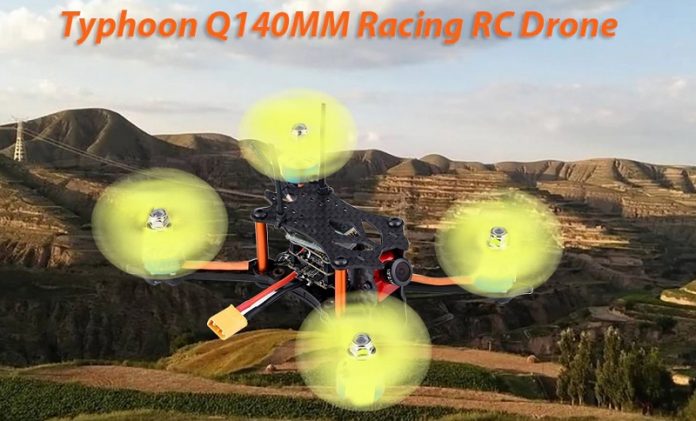 Having a wheelbase of 140mm, the Typhoon Q140 can be considered rather a mid-sized FPV drone than a micro one. Like most of the actual FPV drones, the Typhoon Q140MM also comes equipped with a versatile Micro F4 flight controller. Through BetaFlight configurator you can set the flight mode that fits best for you.

In front of the aircraft is located a 800TVL FPV camera with 1/3″ HAD II CMOS images sensor and 2.1mm wide angle lens. The camera is paired with a 40CH/5.8G video transmitter. The VTX’s power can be toggled between 25 and 350mW.

What’s in the box?

The Typhoon Q140 quadcopter is available in two package versions: PNP and BNF. The only difference between them, is that BNF (Bind n Fly) comes with pre-installed FRSKY XM+ radio receiver.

Needed to be completed with: