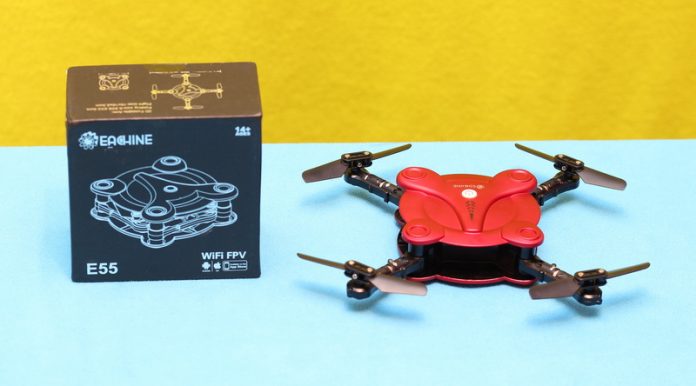 Tiny cameras that can fly still seemed like a sci-fi dream just few years ago but,  with Eachine’s new E55 quadcopter, the future has arrived and it’s dirt cheap.

Cheap flying cameras like Eachine E55 are very often called “Selfie drones”, but this is a bit exaggerated. The truth is that you can’t buy anything under $500 in compliance with the term.

When it comes to affordable drones, Eachine is in the top 10 favorite brands. Over the time I reviewed many of their products and I can say they have a good price/value ratio. 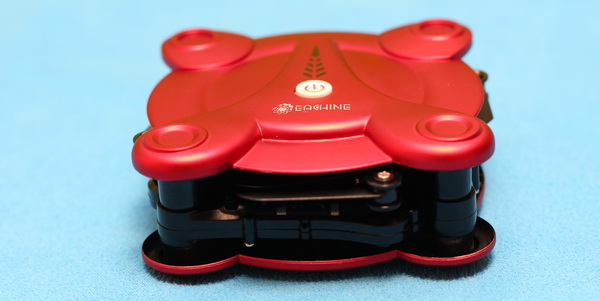 Eachine E55 is available in two variants, BNF and RTF (with remote controller). Both versions can be found in black and red colors. You can find this gadget also under the name of “FQ777 FQ17W”.

I will start my Echine E55 review with thanking Cherise from Banggood for offering me this cool gadget. Also I should mention that I don’t get paid in order to make my review in a favorable way for them.

Inside the surprisingly small box, besides the folded aircraft with loaded battery, I found the following: velvet carry bag, USB charger, one pair of spare propellers, screwdriver and user manual. BNF package, so no remote controller included.

Compared to the JJRC H37 Elfie, this E55Mini has a square shape instead of rectangular one.

Out of the box the aircraft measures about 6.5 by 6.5 by 2.5 centimeters. Extending the arms has footprint of 11.4 x 14.7 centimeters (16cm rotor to rotor). Total weight with loaded battery is exactly 46 grams.

The 2-blade propellers are also foldable, which is unusual for such a cheap RC toy.

On top of the aircraft is located the power button and a Eachine logo.

Motors are horizontally orientated instead of vertically.

During night flights you will be guided by two blue LEDs in front and two red ones on the back. 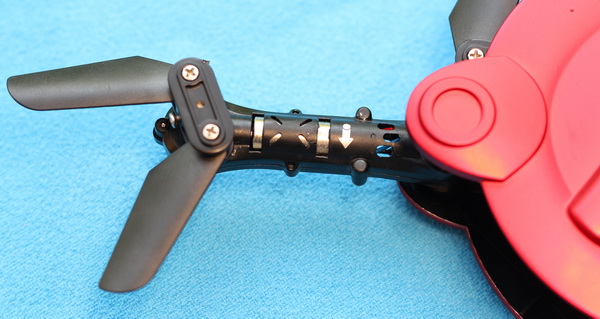 According to the manufacturer specs, the 300 mAh battery allows about up to 8 minutes of flight autonomy. Hopefully my maiden flight will confirm this nice playtime.

Thanks to the included velvet bag you can conveniently carry the E55 quad and also store it safely.

Scanning the QR code from the E50’s user manual you can easily install the APP either iOS or Android.

Through the APP you can control the Eachine E50 in two ways: virtual sticks and smartphones gyro.

The APP allows to take pictures as well as stop/start video recording.

Under “Gravity” mode, after you set the desired flight altitude, you can control the flight movements even with only one hand by tilting the phone on the direction you want to fly the drone. Pretty awesome feature :)

The AirFun UFO APP allows to calibrate the aircraft sensors. This is necessary when the quad-copter starts to fly abnormally.

Thanks to the “Stop” button, you can instantly shut down all the motors if something goes wrong.

Firstly I thought that something is wrong with my Eachine E50 because I didn’t find the camera. It is well masked/protected by the bottom and top plate of the aircraft.

The onboard 0.3MP camera allows to capture photos and videos with resolution of 720 x 576 pixels. Featuring WiFi FPV, you can display the camera’s live-video feed on your smartphone.

Three minutes of recorded video occupies about 16.6 MB. The Eachine E55 doesn’t require a micro SD memory card because the captured files are stored on your smartphone’s internal memory under the “AIRFUN UFO” folder.

Although the quality of the live-video is quite good, the recorded videos has poor video quality. Especially indoor under artificial light conditions.

Hi, I’m back after few flight with the Eachine E55.

Firstly, due its small size I thought that will easily took by wind. But surprise, thanks to the low-profile design it handled quite well.

The altitude-hold feature is really great. You need to focus only on the flight direction of the aircraft.

Note: After flight, unplug the battery otherwise it can be damaged. Due the “soft” power switch, little power consumption exists even the quad is powered OFF.

5Should I buy it?

If you look for an easy to control and inexpensive lean-to-fly drone, I will say YES.
This little RC toy is full of fun. Being very compact you can take it with you everywhere.
My only disappointing was regarding the poor video quality, but who can expect award winning aerial videos from this price tag!?

For those who became curious and want to try it, this mini foldable drone can be ordered for $32.99 without transmitter and for $37.99 with RC right here. Both variants are delivered free of charge.

The only visible difference between these two drones is that the FQ17 is also available in white color. The rest, features and specs, look identical.

Thanks for reading my review. If you have any question or suggestion just drop me a comment.

Fly safe and have fun!