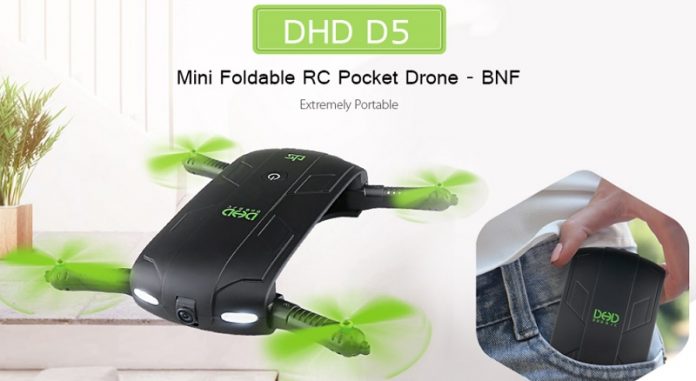 Following the success of the JJRC’s Elfie, lately the drone market has been invaded by many similar “selfie” quad-copters like this DHD D5.

Like the original, the DHD D5 adopts the same fold-able design with two frontal LED lights. Camera is also 0.3MP (480p video resolution) with WiFi real-time image transmission. Frankly, excepting the top logo there are not too many differences between the D5 and the JJRC H37.

Powered by a 500mAh Li-Po battery, the advertised flight time is about 7 – 8 minutes.

Included with the DHD D5 drone

Featuring APP control, the D5 Sefile drone does not require a physical remote controler. In order to control the aircraft you will need to install on your smartphone the DHD FLY app. You can use virtual sticks or the smartphone’s gyro sensor.