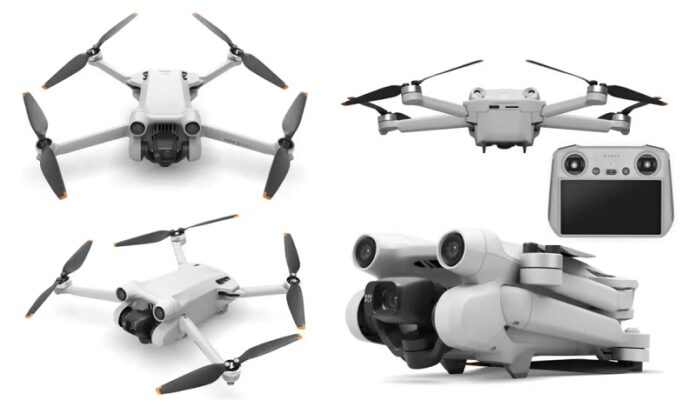 DJI has redesigned its Mini drone for its third generation, which will be officially launched on 10 May according to the leaks. Rumor after rumor revealed all important features of the upcoming DJI MINI 3 Pro. Promising a flight time of up to 47 minutes and a range of 12Km (7.5 miles) the MINI3 Pro ranks on the top of our under 250grams drones of 2022 list.

Many say the new design makes the MINI 3 look like a flying frog. The first thing I notice is the front/rear obstacle avoidance sensors. Unlike its contenders, they are both positioned in the front.

Similar to the FIMI X8 MINI, the DJI MINI 3 Pro will be available with two types of batteries. While the ‘standard’ pack provides about 34 minutes of flight time, the ‘Plus’ one has an amazing 47 minutes of battery life.

The DJI Mini 3 Pro drone promise to capture stunning 4K@60fps videos and 48MP RAW photos. For dramatic Full HD slow-motion footage, you have an option for 1080@120fps video format. This kind of video capability makes it unique in its weight class.

DJI Mini 3 Pro is equipped with a 1/1.3-inch CMOS image sensor which comes with dual native ISO and supports the direct output of HDR images. Thanks to the low aperture (f/1.7) lens it is suitable for night videos.

Insane range with the new OcuSync 3.0

The third generation DJI Mini features the OcuSync 3.0 (DJI O3) flagship-level video transmission system. It provides a 1080p@30fps live feed at distances up to 12 km. The MINI 3 Pro will be available with the standard RC-N1 remote control and the new DJI RC Pro transmitter with a built-in FPV screen.

The latest leaks suggest the DJI Mini 3 Pro’s official launch will be on 10 May, which is slightly later than its expected April arrival.