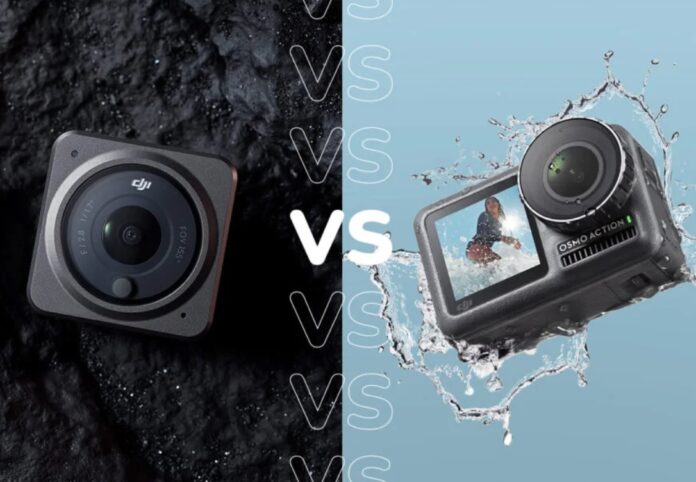 DJI announced their first Osmo Action camera in 2019, which is supposed to be a GoPro killer. It was the first action camera on the market with a second screen in front for vlogging. Two years later, DJI announced the Action 2 with a completely new ‘game-changer’ modular design. It was the first action camera with two main parts: camera and display modules. This approach was great for those planning to use the camera installed on their FPV drone, helmet or o bike where the display is practically useless. Three years later, DJI announced ACTION 3, which follows the original OA’s design.

The latest Osmo Action 3 was announced on the same day as the GoPro Hero 11 Black. Besides returning to the traditional design, DJI made just minor improvements, such as enhanced cold resistance and better waterproof capabilities (16m vs 10m vs 11m) – but kept the previous model’s 1/1.7-inch, 12-megapixel sensor and maximum 4K@120p video resolution. Regarding video stabilization, the V3 Osmo Action has RockSteady 3.0, HorizonBalancing, and HorizonSteady. The Action 3’s camera offers a 155-degree field of view (equivalent to a 12.5mm full-frame lens), considerably wider than its contender has. In our GoPro 11 vs DJI Action 3, you can find all the differences and similarities between these top-notch action cameras.

The third-generation OA has a set of mounting points at its base to secure the camera for recording (landscape). It also ships with an accessory frame that adds a second set of mounts for 9:16 portrait recording -a great feature for social media content creators.

If you’re still unsure which DJI Osmo Action camera is right for you, simply drop a comment below, and we’ll do our best to help!