Even Eachine advertises their new E51 as being the world’s smallest “sElfie drone”. They already have an even smaller model called E55 Mini.

The Eachine E51 was announced in two variants (RTF and BNF). For extra 7$, the RTF package includes a nice extendable remote controller.

When it comes to first-time pilots, certainly one of the most important feature of this selfie quad-copter is the alt-hold. This means that the pilot can practice the basic flight movements without the need of permanently adjusting the flight altitude. 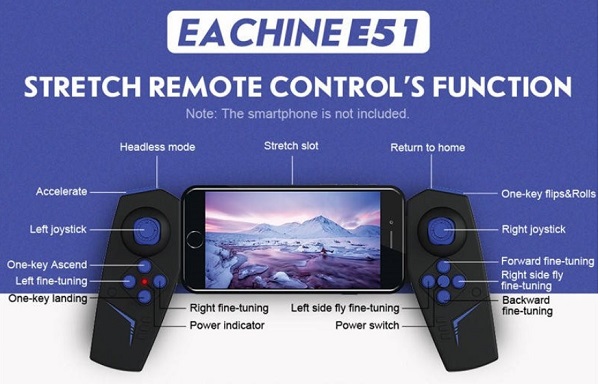 This “Elfie drone” madness, started with the JJRC H37, which I already reviewed here on FirstQuadcopter.com. This concept was adopted by several manufacturers over the last two months. All of them tried to add something new to the basic design. In my opinion, the Eachine E51 drone not just looks better but also brigs some new cool features.

Instead of a 0.3MP camera, the E51 drone is equipped with a HD 720P camera, which should allow to record more clear videos. The angle of the camera is adjustable in order to obtain the best field of view.

Being powered by a 750mAh battery, the advertised play time of the Eachine E51 is about 7 minutes.