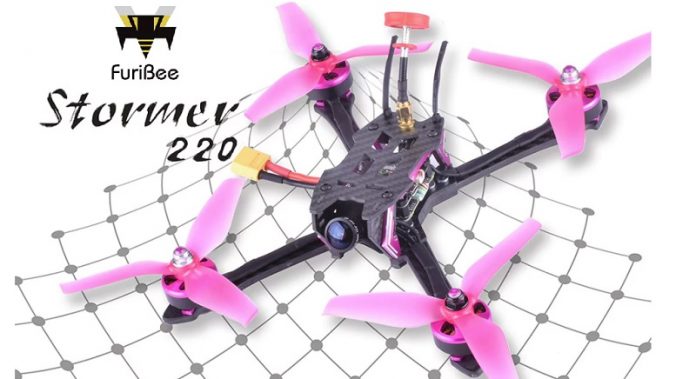 Equipped with versatile F4 PLUS Flight controller, the FuriBee Stormer 220mm offers all the latest features that you can expect from a professional racing FPV quadcopter. In addition, according to the manufacturer’s specs, the Stormer 220 mm can be powered with up to 6s Li-Po batteries.

Through BetaFlight Configurator, you can set 3 different flight modes. While Air mode is recommended only for experienced pilots, Angle mode (stabilized) is suitable for first time pilots as well.

The lifting power is generated by for pieces of powerful 2308 2200KV brush-less motors and 5042 3-blade propellers.

In front of the aircraft is located a 600 TVL camera with 1/3″ Sony SUPER HAD II CCD image sensor. Real-time image transmission is achieved using a 5.8G, 48CH VTX with adjustable broadcast power (up to 200 mW).

As you can see in the image bellow, the FuriBee Stormer 220mm offers not just almost identical features with the HolyBro Kopis 1 drone, but also shares similar design. It adopts black frame with pink elements.