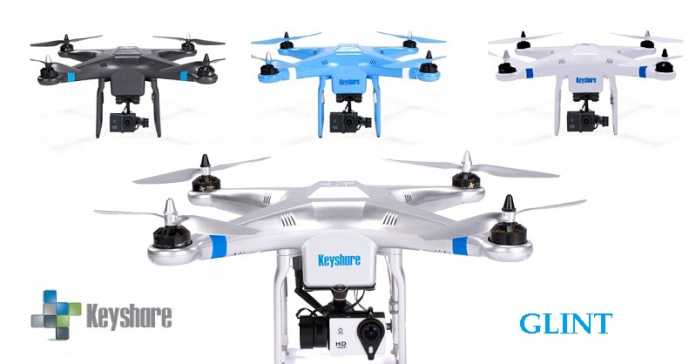 Through my FirstQuadcopter FaceBook page I found from Meihong Pan about this Keyshare Glint quadcopter. On the first look it seems to be a very promising quadcopter and a fearless alternative of the DJI Phantom series. This model will be available in at least 3 different packages, the base package will include only the Keyshare Glint with the remote controller. The most expensive deluxe edition (Glint Pro+) will also include the followings: 2D Gimbal, GoPro alike FHD camera and 5.8GHz LCD screen.

The actual tendency in the world of semi-professional quadcopters is to use their own gimbal and camera without letting any upgrade and tuning possibilities. Frankly, I don’t like this and I was glad that this new model at least apparently can be used with any other gimbal and camera.

Regarding the design of the Keyshare Glint, the square on the upper side of the body is what draw my attention while the rest is quite common for any other quadcopter from it’s category. Other information regarding the design is that it will be available in 4 different colors: white, blue, black and silver.

The generous 78 volt-ampere Li-Po battery allows up to 25 minutes of continuous flight.

In my opinion, this Feifan Keyshare Glint quad-copter can succeed only if the price will be half of the Phantom 3 Standard.

On the video below two crazy guys from the Keyshare’s research team made some rough tests with the Glint quadcopter which proves the maneuverability of this new quad-rotor.

Images with the Keyshare glint Quadcopter