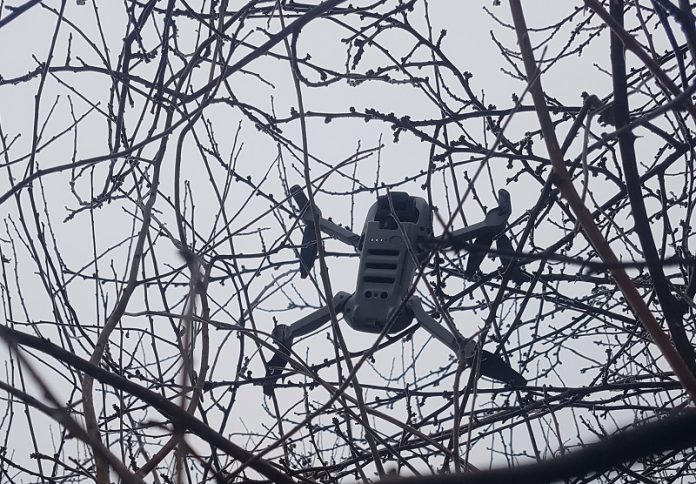 Since I received my Mavic Mini for review, I had more than 7 hours of pleasant flights. In this time I made more than 50th successful flights with a total distance of 64Km. I flew with confidence over rivers, lakes, forests, and roads. I did range tests, battery life tests, wind resistance tests, and everything went fine till yesterday’s sudden crash.

Before my personal experience I have read about many crash reports of the Mini Mavic and I thought they happen due to pilot error – honestly I didn’t believe that a DJI product can just fall from the sky or fly-away with no reason. On Facebook groups and forums, every time someone reported a crash, 10 others said that their Mini is just fine, it works perfectly and he probably just made a beginner mistake or it just used non-stock propellers.

The full story of crashing my DJI Mavic Mini drone

In the following article, I will describe in detail how a routine flight ended in a nasty crash. I will give you some advice about what you should do if crashing is inevitable and how to find and recover your precious drone. Also, if the crash was due to hardware error, I will explain to you how to collect the log files in order to send them to DJI’s customer support in order to obtain a free replacement or money refund. In the case of a pilot error, you will need a paid DJI care refresh service in order to receive a new drone.

Prepare for the worst, hope for the best!
Yesterday morning I started by flashing the latest firmware (v01.00.0400), which enables manual unlock of GEO zones. Everything went smoothly, in few minutes I was ready to test the new features. Before take-off, the DJI Fly APP prompted me to perform compass calibration, which I did in no time. So far so good I thought…. Battery fully charged, low wind, temperature ~2°C, a bit foggy, but this was normal for this period of the year. 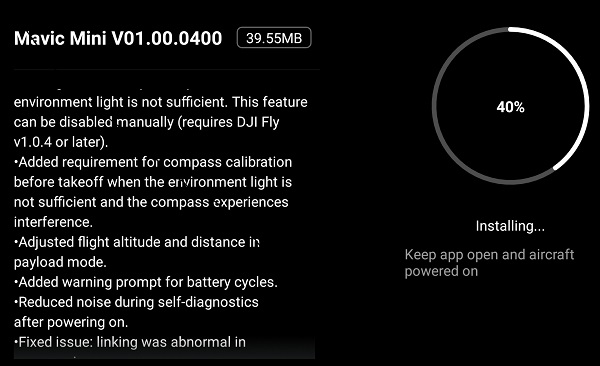 Every-time I upgrade a firmware, software, replace a spare part or just change some settings I perform some proximity maiden flights. I try to fly at low-altitude and short distance, keeping my eye on the aircraft.

How and Why it crashed: Hardware failure, a Software bug or Pilot error?
The first minute of the flight was perfectly normal, no sign about what comes next. Battery level was OK, FPV signal stable, everything was like it should be. Due to the low visibility, I decided to bring it back (manually, without pressing RTH button) and land. When it was about 30 meters far from me it stopped and started to descend – at this time I had no more control over the drone. As I flew at low altitude, it was just about 20 meters about bushes. I desperately pushed up the throttle stick then finally stopped losing altitude, I gained controls back for few seconds and lose it forever. At that time I realized that my Mavic Mini will surely crash land, my only consolation was that at least it wasn’t above a lake.

In the drone footage above you can see my reaction running to the predicted crash zone. Also, in the video below (flight record from DJI Fly APP) you can see that despite the throttle was at the maximum value it continued to lose altitude – I think this is the perfect proof that it was not about a pilot error. Later, analyzing the logs I found that my Mavic Mini had 4 times some “Not Enough Force/ESC Error“, despite that was no wind and battery level was more than 70%.

As I am quite used with crashes, collisions, fly-aways and other ugly things, I’m always prepared for CSC (Combination Stick Command) which instantly stops the motors. In order to reduce damages, I immediately moved both sticks to outer-lower position when the Mini hit the bushes.

How to find your crashed Mavic Mini

If you are close to the approximate crash location and the battery is still loaded in the drone, you just need to activate “Start flashing and beeping” in the DJI Fly APP. You can access it in the “Safety” tab under “Find my drone”. Thanks to the loud noise and flashing light I found it easily in the 3m high dense bushes. I had to cut away in order to be able to recover it.

My suggestion is to always inspect the crashed aircraft for missing parts, if there are, you should look for them right then. I had luck the crash/collision was gentle and even the propellers seemed okay – probably stopping the motors helped a lot. Also, there was no sign of icing on the props or aircraft which could have caused the crash.

In case you don’t even have a clue about the crash zone, the APP will show you on a map the last known location of the aircraft. Under the “Profile” tab you have access to “Flight data center” where you can review the journey of your flight, including all relevant flight data (battery level, flight path, altitude, and distance) and all the stick movements you made. Also, it could be helpful to review the FPV video from your phone, which could help identify the search area.

A bit disappointed, but determined to find out what happened, what could cause the crash, I started to upload the log files to AIRDATA UAV – an online tool that allows analyzing your flight data. Their mobile APP automatically extracted the flight logs from the DJI Fly APP, but not from the aircraft. In case you manually want to download the APP’s logs, you can browse your phone’s memory for “DJIFlightRecord_DATE_[flight id].txt” files under “\DJI\dji.go.v5\FlightRecord\” folder. 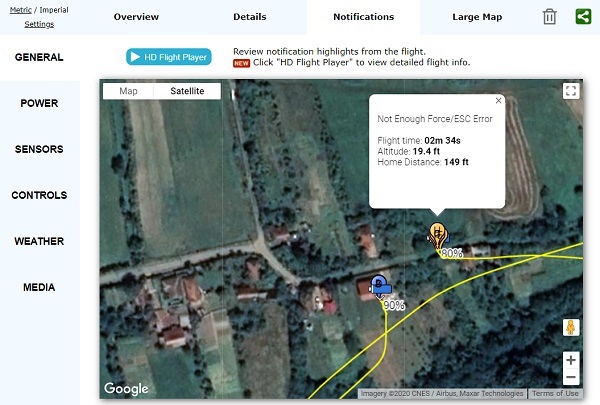 In order to download the content of the Mavic Mini’s “black box” you have to download and install the “DJI Assistant 2 for Mavic” on your Windows or iOS computer. You need to connect the MM to your PC using a micro USB cable but remember first to power ON and only after plug-in the cable (within the first 20 seconds). The tool has 3 basic functions, firmware upgrade/downgrade, Log export, and Flight simulator. In my case, the log file had more than 100MB. 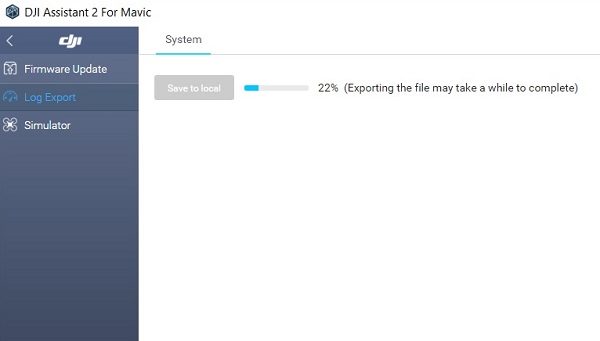 After I downloaded all the flight records and visually inspected the aircraft for a sign of damages, I decided to turn it on and check if it can take-off normally. I was happy to find out that everything seems OK. I also did a full battery hovering test, the Mini staid in the air in the same position for 20 minutes without a sign of any issue.

Anyway, I decided not to make any long-range flight till I get some feedback from DJI Support about my crash. I sent them all the flight records (log files and camera footage). I need a confirmation from them that it is safe to use my Mavic Mini or I should send it back to them for repair or replacement. 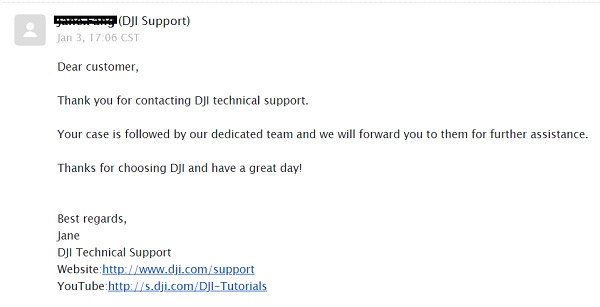 Often my friends are asking me why I do not fly over peoples like concerts or outdoor public events, I answer them that I believe that every object on the sky sooner or later needs to land – if you have luck it will be in a controlled way. I can take it if I crash a $399 drone, but I would not risk to heart anyone doing this, there is no footage to worth this.

The Mavic Mini is a great little drone, but it doesn’t have obstacle avoidance and probably other safety features too, like the more expensive “Pro” series. Also, the Mini’s battery is not that “smart” like the ones its premium brothers have.

Why are so many Mavic Mini crash reports? My personal opinion is because being a more accessible friendly priced drone is mostly purchased by completely newbie pilots – which due to the lack of flight experience can do fatal mistakes.

Of course, not all the crashes are a result of pilots error, this is where the flight logs come in the picture, they will help you prove to the manufacturer that it was about a hardware error. Drones are like any of your other electronic devices (phone, camera, or computer), they can be damaged without any prior signal, so you should be always prepared for such a situation!