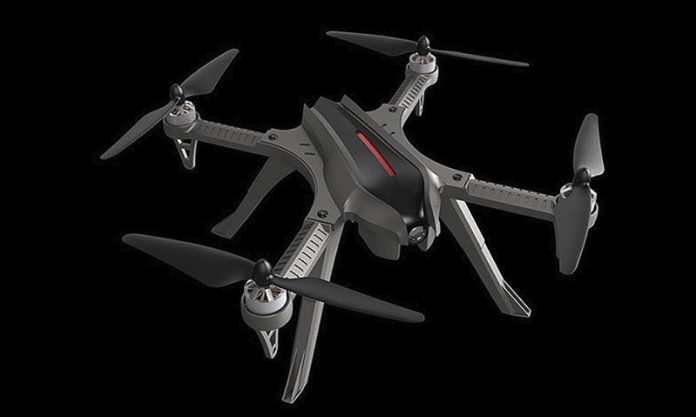 Thanks to the high landing gears, the MJX Bugs 3H drone can be equipped with a GoPro or other similar action camera. The great lifting power is generated by 4 pieces of 1800KV brushless motors with 7.4″ propellers.

As usual, the “H” letter in the name of the MJX B3H means that the quadcopter features altitude hold. Thanks to the barometric air-pressure sensor, the Bugs 3 H is capable to autonomously maintain its flight altitude at the desired level. Probably this is the most important feature over its predecessor (the Bugs 3). This feature is very important for aerial filming. Anyway, without a hardware gimblal you should not expect smooth stable video footage.

According to the manufacturer’s specs, the 1800mAh LiPo battery allows up to 17 minutes of flying time. Not bad, but probably when the MJX Bugs 3 H is fully equipped (camera and blade protectors) this time gets much shorter.

MJX packs with their upgraded Bugs 3 H drone a nice remote controller with two way communication. The transmitter will alarm you in case it loses connection with the drone or your flight battery’s voltage goes down to critical levels.