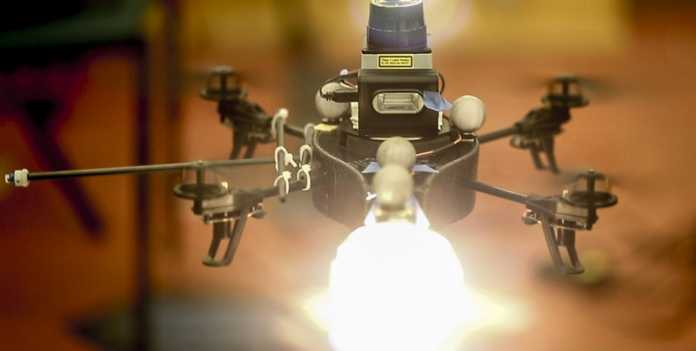 As we know, over the time quadcopters became accessible for hobbyist and some industries. At the beginning, the main application for this kind of aircrafts was in the military.

Usually, the subjects are illuminated from the front with a flash or a studio light. The Rim lighting is a technique used to illuminate the side of a subject, also known as backlighting.

Modern quadcopters can be easily equipped with flashes or continuous powerful LED lights to obtain the desired subject illumination in studio photography. The quadcopters guided by sensors can move themselves to track changes in subject, as well as photographer’s position.

“Rim lighting is a particularly interesting effect, because you want to precisely position the lighting to bring out silhouettes,” says Ravi Ramamoorthi, a professor of computer science and engineering at the the University of California, San Diego.

“Other effects are in some sense easier — one doesn’t need as precise positioning for frontal lighting. So the technique would probably generalize to other light effects. But at the same time, as-precise control and manipulation may not be needed. Manual static positioning might be adequate.”

In the video below the MIT (Massachusetts Institute of Technology) demonstrated a prototype system for providing rim lighting using a quadcopter.

Future versions of this system could incorporate many quadcopters working together as a team to obtain more complex lighting effects.