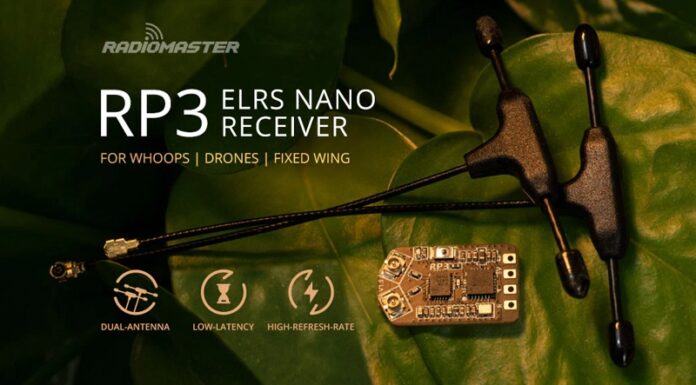 For Christmas 2022, RadioMaster announced another 2.4 GHz ELRS radio receiver for long-range enthusiasts. RadioMaster RP3 features a dual-antenna diversity system that ensures a stable signal. You can opt to install one antenna in the front and the second one in the rear of the aircraft. You can also mix polarization by installing one antenna vertically and the other one horizontally.

The RadioMaster RP series of ExpressLRS receivers are designed with size, ease of use, and range in mind. Utilizing ELRS Open-source firmware, the RP series of nano receivers deliver features and range today’s pilots have come to expect.

Developed around the ESP8285 MCU and SX1280IMLTRT RF Chip, the RP series offer LoRa and FLRC 2.4ghz RF links, offering incredible range and low latency. With built-in Wifi communication, FW updates can be done on your craft without the need to remove the receiver. Binding can be done using a bound phrase meaning no more bind plugs or fiddly button presses while trying to plug in your battery.

The RP3 receiver features a Skyworks SE2431L providing an LNA for improved receiver performance, a PA providing up to 100mW of telemetry performance, and antenna switching for antenna diversity. It is compatible with TX12 Mark II, TX16 Mark II Radio, Zorro, and Boxer radio controllers.