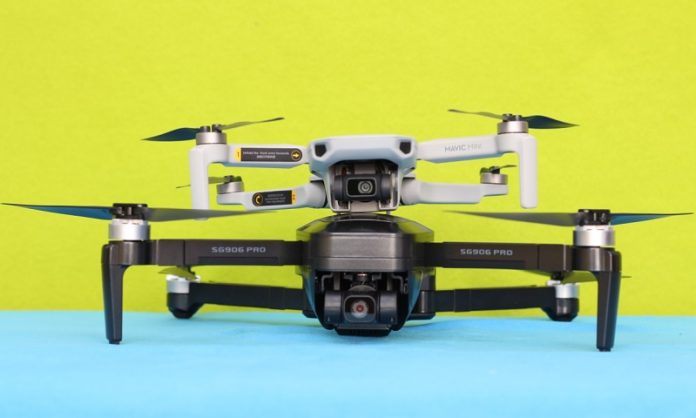 After we published our ZLRC SG906 Pro 2 review, we got lots of messages regarding how good is this drone and if it’s a better option than the DJI Mavic Mini. I put this article together in order to make things clear and help you make the right decision.

In the table below I will try to compare the most important specs of both drones. I highlighted with red were the SG906 Pro 2 excels and with green where the Mavic Mini shines.

Both drones are powered by two-cell battery packs. While the SG906 Pro 2 has a 3400mah battery, the Mavic Mini has only a 2400mAh one. Despite the smaller capacity battery, the MM has 4 minutes longer flight time compared to its rival (30min vs 26min).

The Mavic Mini has two radio versions, FCC (4KM range) for the US market and CE (2KM range) for the European customers. Featuring a standard 5Ghz WIFI connection the SG906 Pro 2 has only up to 1200 meters control range and 800 meters FPV range.

In terms of video-downlink, these two drones adopt different approaches. While the SG906 Pro 2 transmits directly the live-video feed to your phone, the Mavic Mini sends it first to the transmitter, then via cable connection (USB or Lightning) to your phone.

Personally, I found the Mavic Mini a much reliable drone with better battery life and superior flight range. In terms of image quality, DJI’s drone has also better performance than the ZLRC drone. Furthermore, weighing just 249 grams, the Mavic Mini does not require FAA registration, so you can play with it out of the box.

On the other hand, the ZLRC SG906 Pro 2 has a much friendly price tag, actually for the price of the Mavic MINI you can buy two Beast Pro 2 with 3 batteries each.