The XT198 Rainbow is a new foldable drone from SIMTOO. It features on-board 720P camera with WiFi real-time image transmission. Thanks to the optical flow camera and barometric air-pressure sensor, the SIMTOO XT198 quadcopter has an excellent hovering capability.

With folded arms, the fuselage measures only 142 x 86 x 48 mm and weights about 127 grams. Arms can be easily folded/unfolded just in seconds. During night flights you will be guided by blue LED lights in front and red ones on back.

According to the advertised specs, the SIMTOO Rainbow has up to 10 minutes flying time. The 3.7/970mAh flight battery can be recharged in about 90-120 mins.

The included transmitter has only one control stick, which acts like a throttle stick from a regular RC. While moving the stick up/down you can increase/decrease the flight altitude&speed (throttle), moving it left/right will rotate the drone around its own axis (yaw). This kind of remote controller is also used by the JJRC Baby Elfie quadcopter. 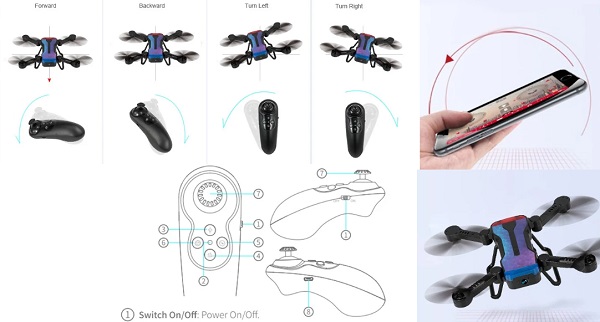 Thanks to the built-in gravity sensor you can change the direction of flight to right or left simply by waving the transmitter on the desired direction. Furthermore, you can control the drone through your phone’s internal gyro-sensor (via compatible APP).