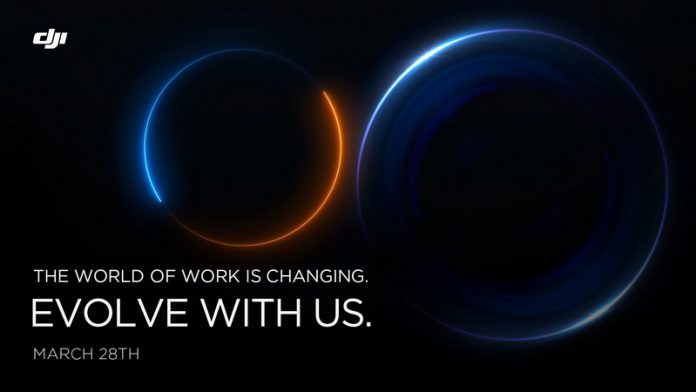 Frankly, I don’t know :D. It could be the Phantom 5, Phantom 4 II or Mavic 2 or even all of them together :). What is certain is that DJI recently published the following tweet:

Over the years, DJI has reshaped the way creative minds view the world. Now, we’re changing the way you work in it. Stay tuned for what’s next on March 28th.

They always have been a big fan of mystery. Every new drone from them was kept a secret until the BIG launch day.

Last week I started thinking about to replacing my old Phantom 3 Advanced with a more portable Mavic Pro or Mavic Air. This announcement stopped me to pull the trigger. Surely, their new model, either it will be the Phantom 5 or Mavic Pro II, will have lots of new features and extended flight time.

In the last few days I saw many guesses about DJI Enterprise’s announcement on Twitter. Most of them are voting for Mavic Pro 2, but there are also few ones which are hopping for the Phantom V with better camera and extended flight time.

Personally, I would speculate and hope for a new Mavic Pro II because it should push down the price of the older version. Anyway, it’s going to be interesting to see what really happens on the 28th. We shall see…

The hole thing was about a enterprise product not a consumer one as we all hopped. DJI introduced on March 28th their Zenmuse XT2 dual sensor thermal imaging solution for next generation aerial imaging. In order to allow in the same time, ULTRA HD aerial videos and high quality thermal imaging, the XT2 is pairing the FLIR Tau 2 thermal sensor with a 4K visual camera.