When Yuneec reveled its incredibly Typhoon H hexa-copter at CES 2016, everyone was amazed by its capability to avoid obstacles. Contrary, I was more impressed by the capability of Yuneec Typhoon H to land even if one motor fails. Typhoon H’s six-rotor design automatically switches to five rotor mode in case one motor fails allowing to remain in air and have a safely land. I’m curios if this mode is also activated when one ESC fails or one of the propellers is lost in the air. In my opinion, this awesome feature is more important than the obstacle avoidance which was mainly designed to prevent accidents caused by the pilot errors.

Certainly, the “obstacle avoidance” is also important due to the fully autonomous flights. For example, if the aircraft is set to “Follow me” mode or is engaged “Return to Home” and meets an obstacle in front of, this feature will allow the aircraft to change the flight course by itself in order to prevent collision.

My only disappointment regarding its predecessor, the Yuneec Q500 4K which I reviewed here on FirstQuadcopter.com, was the short control range. It seems that the manufacturer has managed to almost triple the flight range of this new model.

The 4s 5400 mAh flight battery allows about 25 minutes flight time, which is slightly less than its contender, the DJI Phantom 4, has. 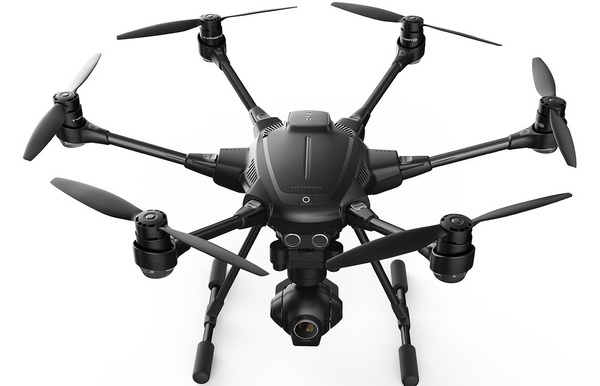 Yu Tian, chief executive officer of Yuneec International said about this new hexa-copter “We’re excited to bring our game-changing Typhoon H to market, opening access to creative possibilities previously only available in expensive professional platforms. Now, anyone can capture incredible aerial footage like never before…It’s our most advanced consumer drone ever, setting a new standard in capability and value, while being ready, easy and safe to fly”. Must admit that compared to other consumer drones, the Typhoon H is a piece of art. I especially love the foldable arms and retractable landing gears, which are usually offered by more expensive model.

As I remember at the time when this Typhoon H was announced at CES, its predicted price was about $1799. Now, B&H and other retailers started to promote on a more friendly price of $1299. Unfortunately, it looks that Yunnec gave up to include for free in the package their SteadyGrip handle which allows to use the CGO3+ as handheld camera.