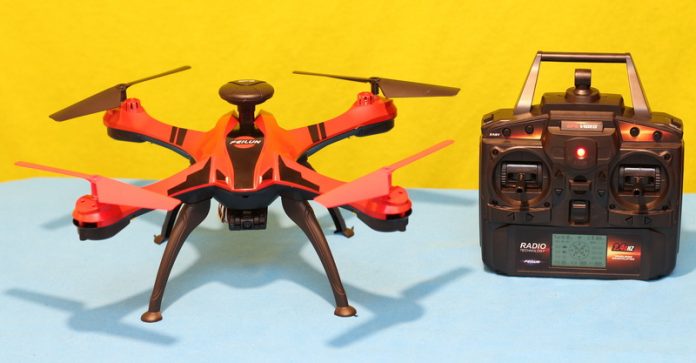 Frankly, how could FeiLun expect to remember a drone name like “FX176C2”. If copy/paste actions would have not exist, I could not write my FEILUN FX176C2 review :D

Many toy drones claim to offer “One key Return to Home” feature. Without a Global Positioning System (GPS), this feature can’t work accurate enough, practically the drone is just trying to guess the route back home.

In the past, GPS was present only on expensive drones, like DJI ones. As GPS technology evolved and became more and more affordable, toy grade brushed drones like this FX176C2 are being produced with this feature as well.

FEI LUN Toys announced the FX176 drone in two variants, one with 1Mp camera and one with 2Mp camera. With a price gap of only $6, I don’t have any doubt which one will be found this year under many Christmas trees. BTW, I just realized that “C1” after “FX176” means 1Mp and “C2” means 2Mp version.

Disclosure: I received this GPS drone as part of a product review collaboration with RcMoment. Product specs and quality may vary according to the manufacturer’s reliability, so I cannot guarantee that you will get a product that performs exactly the same as seen in my article.

After about one month since we agreed on the review, I received the FEILUN FX176. Inside the nice cardboard box with transparent windows and handler, besides the aircraft, I found the following: remote controller, phone holder, 4 x landing legs, 1 set of blade protectors, 2 pairs of spare propellers, flight battery, USB battery charger and user manual.

FEILUN FX176 comes partially assembled. Prior to your first flight you need to attach the landing skids and blade protectors. As most of the drones under $100 are fully made of plastic, red & black colors makes the aircraft’s design more attractive.

Measuring about 30 x 32 x 14 cm, it can be considered quite large, so I’m expecting good wind resistance.

In order to allow best satellite coverage, the GPS antenna is located on top of the fuselage. Note: GPS works properly only outdoor in open spaces.

Thanks to the high ground clearance, there is a possibility to replace the stock camera with a better one (if needed), especially that the camera has connector and can be removed in just seconds.

The 2 cell 700 mAh Li-Po is loaded from the back of the quad-copter. According to the manufacturer’s specs, with a fully charged battery you can have around 6 minutes of flight time. Power On/Off switch is located under the tail of the drone.

What features it has besides GPS?

During night flights you will be guided by 4 LED lights, red LEDs in the front and blue ones on the rear (one near each motor). Additional red light in front will help you track the exact orientation of the UAV.

Even if the transmitter comes with a nice status LCD, due to the outdated design, it looks very bulky.

On front panel, besides the two control sticks (center positioned), there are 8 trimming switches (Take off, Landing, 2 without any function and 4 fake ones) and 4 control buttons (Easy Mode and 3 fake ones). 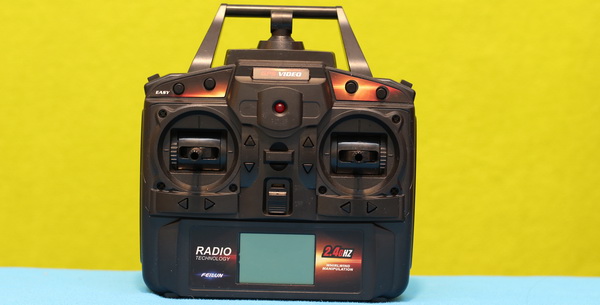 While the left shoulder button allows to toggle between two speed rates, the right one engages the Auto-return to Home feature.

Status screen has a size of 40 x 28 mm and shows the following telemetry info:

Unfortunately, due to the low contrast ratio, on strong day light, the LCD screen seems to be totally useless. Maybe I will improvise a small sunshade for it.

Immediately after I power it ON, I noticed on the screen that it is set to “mode 1” which is not for my taste. I wanted to switch to mode 2 (throttle on left) but I have found no information in the user manual how to do it. I tested every possible button and stick combinations. Nothing! the LCD shows every time mode 1 :(.

Later, during test flights I found out that, even if the screen shows “mode 1”, the transmitter acts like mode 2. Thanks for misleading me X-(.

In addition to the physical transmitter, you can control the FX176 quadcopter through the FL Drone 2 APP using your smartphone. The mobile APP is also required to record videos and to display the camera’s live-video feed. 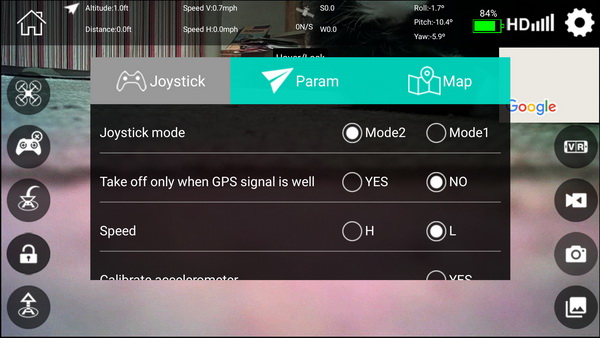 Besides Roll, Pitch and Yaw angles, GPS coordinates are also displayed on the dashboard.

Having some issues with the intelligent flight modes (Waypoint, Orbit and Path flight), I suppose that the APP is not fully developed yet. Furthermore, the map is not displayed correctly as well.

As I previously mentioned, the FPV camera is removable. The angle of the lens can be easily adjusted according to your needs. The WiFi antenna is external and is left lose. No micro SD slot, the footage are stored on the phone’s memory. Six minutes of recorded video occupies about 80 MB.

Surely, camera is not the strength of this drone. It has visible lack of frame rate and details. Don’t mention that Jello effect is also pretty annoying. Anyway, from the beginning my plan was to replace the stock camera with a 5.8G FPV one. I want to use the Feilun FX176 as FPV trainer.

First of all, when you get a new drone, always check the pre-flight steps in the product’s user manual. In case of the FX176C2 it is highly recommended to perform a compass calibration. You know, that voodoo dance with the drone in your hand :D.

Calibrating the gyro sensor could also help if the aircraft starts to fly abnormally. This can be done by moving simultaneously the left stick to the top-left corner and the right stick to the bottom-right corner.

Prior to the take-off, you need to arm the motors by moving both sticks to the lowest-outer position. You can start your flight either by rising the throttle stick or by pressing the “Take-off” button. Drone will rise 2 meters above the ground and wait for your controls. In case of good GPS coverage (at least 8 satellites), the FeiLun FX176C2 hovers precisely in both axis (horizontal and vertical).

It is pretty awesome to real-time monitor the drone’s battery level, its distance from you, speed and flight altitude. These parameters are displayed on the transmitter as wells as on your phone.

Using a WiFi repeater you can easily achieve up to 200 meters FPV range. Not bad for such a toy grade drone.

Most of all, I was curious to test how the Return-to-home feature performs. When it was about 100 meter far from me, I pressed the “life-saving” button. On its own, the drone returned to the takeoff point and gently landed :). Accuracy of RTH is around 2~4 meters.

Before you spend any money, establish your priorities. Are you a newbie, looking to get an ultra-cheap GPS drone? The Fei Lun FX176 would be a great choice! Are you a hobbyist aerial filmmaker hoping to get some award-winning footage? You shouldn’t even be reading my review right now because you need to spend at least 10 times more for such a drone :). 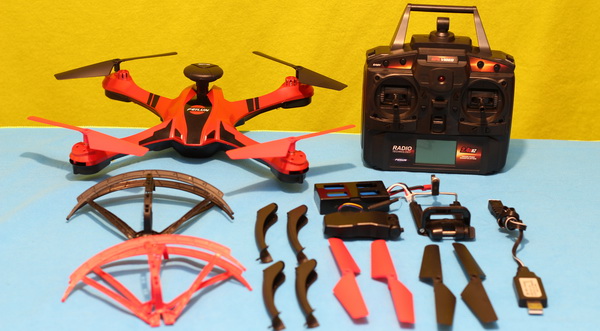