Since I started my journey in the world of multi-rotors I hesitated to make reviews on hexas, don’t ask me why because I can’t specify any real reason. It looks that 2016 changed my appetite because this LiDi RC L6F will be the second hexa copter which I review this month :).

Theoretically, hexa-copters have all the benefits of a four-motors plus some extras: greater overall performance (more motors can generate more lifting power), faster flight speed and higher elevation. Through a good 6 motor design and a smart flight controller it is possible to obtain some redundancy in case of motor failure. This means that the operator will be able to land the aircraft if one motor, or even two,  is/are out! Of course this LiDi RC L6W hexacopter is just a remote controlled toy and we should not expect any safety feature due to the additional motors.

The LiDi RC L6W is cheaper with about $ 15 than the 5.8GHz version and, unlike the L6F, it requires a smart phone to display the real-time video feed from the on-board camera.

When I was contacted by Elliot from Gearbest to review their new hexa-copter I had to choose between the WiFi and 5.8 GHz version. Finally, I opted for the 5.8 GHz model because I was curious whether it adopts a non standard protocol or it can be used together with any other FPV screens or FPV goggles. BTW, the LiDi RC L6F is available in two colors, black piano and shiny blue.

According to the advertised specs, this hexa-copter has about 8 to 10 minutes of play time and near to 100 meters of control range. I do not know (yet) how accurate are these values considering that on those specs it should be sold with an 800 mAh and I receive it with a 750 mAh one…

I received the package in about 15 days after we agreed on the review. When I inspected the box at the postal office I observed an approximate 4 x 3 cm hole in it. It is probably the result of the “carefully” handling. Knowing that there is no point to submit a complaint I went home hoping that any part of the content was not damaged. 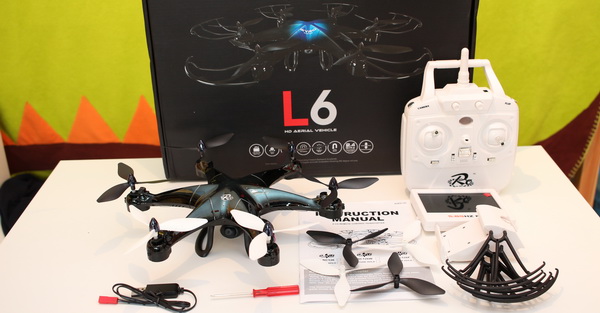 I was lucky, visually inside everything seemed to be unharmed. To check it, I immediately loaded 4 pieces of AA batteries into the RC and I plugged the Li-Po battery into the L6F’s JST socket.

After the regular binding process I pushed up with confidence the throttle stick but surprise… instead of flying straight up, it began to fly on the right until overturned.

When a multi-rotor starts to behave strange it is best to check the propellers and perform a re-calibration. In case of the L6F hexacopter, the gyro calibration can be performed by pushing both sticks in the same time to the lowest-left position.

After the restart sequence finished, I made a second attempt to take off. This time everything was fine, it worked like a charm.

Sorry, I rushed and I almost forgot to describe the package content. Besides the aircraft and its remote controller I found in box the following:

Excepting the propeller guards, all the rest were installed on the aircraft (camera, propellers and landing skids).

Newbies should consider to install the blade guards before their first flight. The installation process is extremely simple and takes only about 5 minutes.

In order to have a clear view of the position (orientation) of the aircraft, it is equipped with two white propellers in front and black in the rest. For the same reason under the front arms are white LED lights while under the rest of the arms there are green LEDs.

The camera of the this aircraft has a similar design with the one Syma X5C models have. The only visual difference is a small 5.8 GHz antenna on the right side of the housing that insures the real time image transmission. I can confirm that the camera uses a standard 5.8 GHz channel and protocol. I got clear and steady live video feed on my Eachine LCD5802S FPV screen.

The camera is capable to record videos with 1280 x 720 HD resolution at 30 fps and 16 bit mono audio. My 60 seconds test video occupied about 120MB on the micro SD memory card.

The captured photos have 1600 x 1200 pixels and are stored in JPEG compressed image format. Reading the EXIF data I found out that the photos are captured by a “Syntek USB camera” with 6 mm focal length at ISO-100.

Later I will upload some sample videos which show the image quality of the recording.

All 3 models of the LiDi RC L6 series has the same kind of remote controller, but for example the L6W has a black one while the L6F has a white one (as shown in the image bellow).

On the upper part of the transmitter there are two fake gimbal knobs which, I suppose, are there in order to provide a more professional look.

As I previously mentioned, the FPV display is installed on top of the transmitter. Both, RC and FPV screen are powered by the same 4 pieces of AA batteries which I think will decrease dramatically the operation time.

By short pressing the top-left button the camera will take a photo and by long pressing it will start or stop the video recording. By pressing the left stick (throttle) as a button you can activate the headless flight mode. With the same technique through the right stick you can engage the return to home function.

Switching between “Low”, “Medium” and “High” speed rates can be made using the trim button located on the left side of the ON/OFF switch.

The battery came almost empty so my first flight was about 2 minutes. After “quick” recharge, which takes about 70 minutes with the included USB charger, I was ready for a second try. The aircraft is small enough to be tested indoor where behaves very well, it is stable and responds accurate to the controls.

Outdoor it is the same thing, very stable and easy to control it. The first person view system is quite usable but I missed a sunshade.

When the aircraft flies out of the controller’s range, the motors are stopped within 2 second.

Unfortunately, this aircraft doesn’t have altitude hold so you will have to play with the throttle stick to keep it on the desired height. Although, I’m not interested in the “RTH”, I tested it and I can say that the “one key return to home” feature performs very well.

Frankly, I was positively surprised in many ways by this hexa-copter. It has a nice build quality and flight performance. The on-board camera offers decent image quality (not the sharpest but jello free). The FPV camera can be paired with many other FPV monitors. My only disappointment is that the package doesn’t include at least an 8 GB memory card (which costs probably around $3).

Considering that for those $86 you will receive a hexacopter with a complete first person view system, this model is the second one which I would confidently recommend for any of my friends.

Thanks again Gearbest for their support letting me review this nice product. Those interested to give it a try for this hexa, it can be ordered from here for $89.99. A good tip, the blue one is cheaper with $3.25 and I think it looks even better :). Just got this “JRLRL” coupon code which will reduce the final price to $82.99.