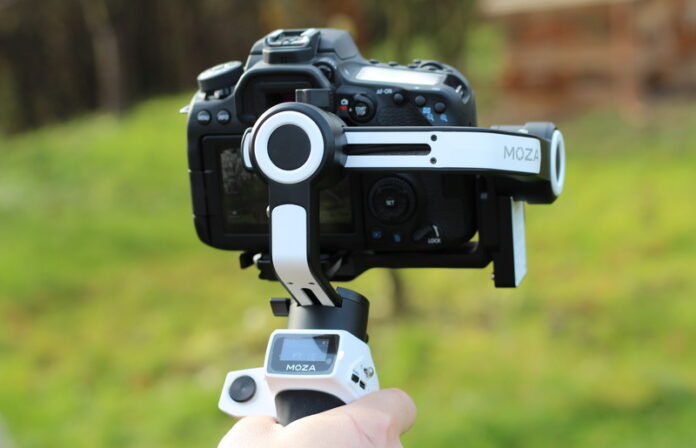 Over the past four years, Gudsen Moza has steadily improved upon its professional AirCross gimbal series. The mighty AirCross S continues the trend of being smaller and even more versatile. It can accommodate a wide range of camera devices and even more simultaneously.

If you are tired of trying to walk around with your camera, holding it still but ending up with shaky YouTube footage, then you should probably get a gimbal. Not long ago, gimbals were mainly for the cinema industry, also heavy and expensive video rigs. Now they’ve come down in size and price, becoming available for prosumer videographers. The Moza AirCross S gimbal brings smooth, handheld cinematic shots to content creators who use mirrorless and compact cameras in combination with their smartphone or 360° action cam without exceeding a total weight of 1800 grams (3.96 pounds).

While portrait videos are the most preferred format for Facebook Reels, Instagram, and Tiktok, Youtube is still optimized for landscape format. If you want to cover all social media platforms, you will need to create your content in both aspects rations, and this can be done only using two cameras simultaneously. Using two cameras at the same time also allows for capturing different FOVs. The Moza AirCross S gimbal’s large L camera bracket was designed to install a mirrorless camera in a vertical position and a GoPro in a horizontal position. Do you need a third perspective? You can attach your phone to the camera’s hot shoe.

Disclosure: I received this 3-axis gimbal as part of a product review collaboration with Gudzen Moza. Product specs and quality may vary according to the manufacturer’s reliability, so I cannot guarantee that you will get a unit that performs the same as seen in my review. As I received a pre-release review unit, the actual package content may vary. 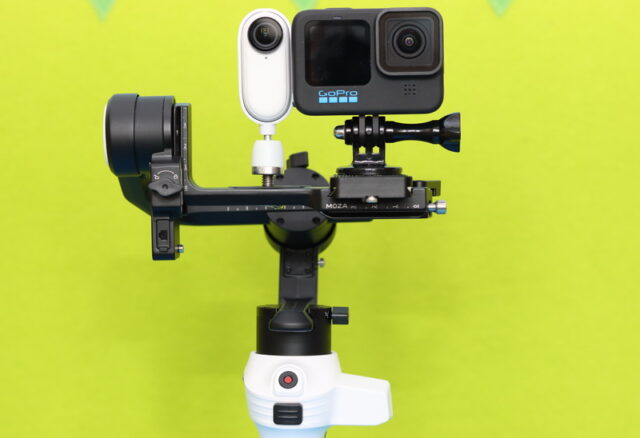 MOZA has become one of the principal innovators in the gimbal market, pioneering new technology and making its products more accessible to content creators than some of its higher-priced rivals. Gudsen Technology has three professional camera stabilizer series (Air, AirCross, and Cinematic) and a consumer one (Moza Mini). The recently launched S-model follows chronologically the 3, 2, and original AirCross. Over time the AirCross series evolved and changed a lot. While the MOZA AirCross 3 adopted a 4-in-1 convertible design for different shooting angles, its successor, the AirCross S, has been optimized to simultaneously accommodate up to 3 cameras or one camera with extensions such as fill light. 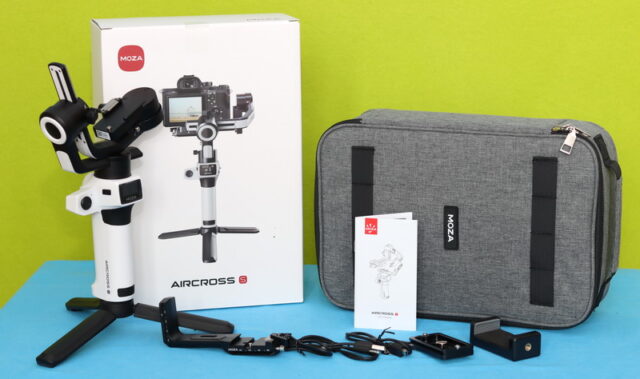 Gudzen packs the AirCross S gimbal in a nice handbag with a handler. By default, it comes with CNC-cut foam padding, but the manufacturer also includes a set of velcro dividers that allows customizing de internal layout according to your needs. Additionally to the stabilizer, there is included a mini tripod, three camera cables (Type-C, Micro-USB, and Mini-USB), a camera bracket, a quick-release plate, and a phone mount. It would be awesome if they also included a hot shoe camera mount, magic arm, and 1/4″ tripod. I found that these extra accessories are must-haves for using two or three cameras simultaneously. 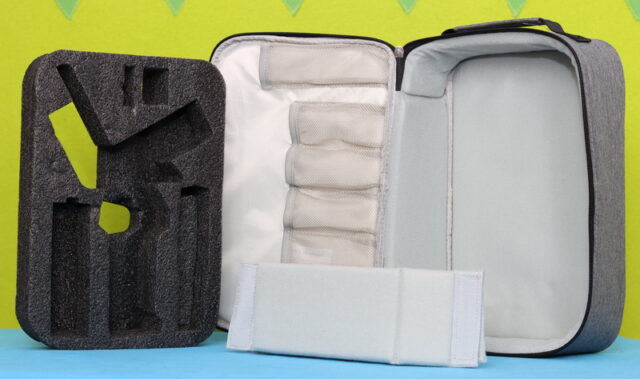 The AirCross S has a classy alpine-white finish. To be honest, it does not have the premium design of my existing gimbal, but for its friendly price tag, you can’t expect more. The gimbal is quite sturdy to ensure that any bumps coming while being used or during transit will not cause any long-term damage.

At 16.4 by 26.5 by 14.7cm (HWD) and 700 grams, the gimbal is much smaller than the older Aircross 3 and can easily slide into any bag. It has metal locks on all-axis that makes it easier to balance the camera when you’re setting things up.

Intended for TikTokers, the AirCross S takes the vertical shooting experience to a new level. Its L-shape camera bracket allows being installed on the gimbal vertically and horizontally according to your needs. In addition to the usual quick-release plate, it offers the option to install a second camera in the center of the bracket (tripod screw not included). 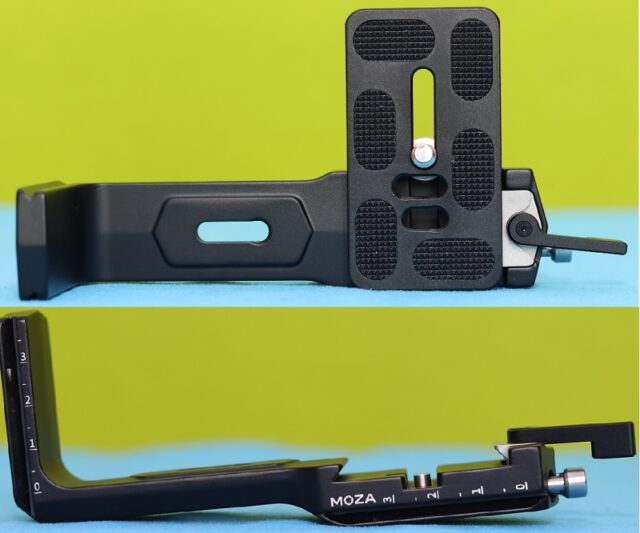 On the front panel, there is a tiny status OLED screen and a thumb 4D control joystick on the left. Unfortunately, if you are left-handed, this layout isn’t for you. On the back, there is a smart-trigger and shutter button for compatible cameras. The USB plug for camera control is located under the tilt motor. The power switch and USB-Type-C ports are on the right side of the grip. 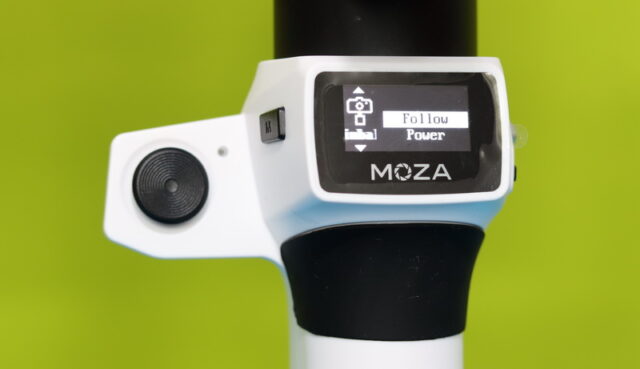 At the bottom of the handlers, there is a 1/4″ tripod mount for the included mini tripod, or if you want to use it with an extension rod or the Slypod – Moza’s motorized camera slider. The provided phone holder can accommodate anything with a width between 58 and 88 mm.

The AirCross S works in partnership with Gudsen’s MozaMaster iOS and Android smartphone APP. Once paired over Bluetooth, the APP gives access to a full suite of creative tools with dedicated modes for motion time-lapse, track recording, and panoramas. The APP also allows remote control, gimbal calibration, and firmware upgrade.

One of the coolest features of the MozaMaster APP is the motion gyro control. You can control each axis by tilting your phone in the desired direction.

The AirCross S has a 3cell 1000 mAh built-in battery that offers up to 12 hours of operation, according to Moza. That running time should be more than enough for most people. Once your gimbal does run out of juice, you can charge it back to full from a PD USB charger in only one hour. Gudsen also incorporated a power indicator LED that blinks when the battery level is less than 20%.

The setup of the AirCross S is very similar to most other gimbals. After you attach de camera(s), you need to start by balancing following the instructions provided by Moza. You need to balance each axis one by one, starting with the tilt one. I suggest while balancing one axis to lock the other two. Balancing was pretty straightforward, you just need to move each axis backward and forward until you find that sweet spot, and it stays balanced.

The Arca-Swiss compatible quick-release plate allows easy camera swapping or moving from a gimbal to a tripod. The 4D thumb joystick allows you to Pan and Tilt but not Roll. The speed of the camera moving increases by a more extensive moving range of the joystick. By triple-pressing the smart-trigger, you can toggle between normal and selfie modes. The gimbal has a 360° pan, 330° roll, and 330° tilt mechanical endpoint range.

My only issue with this gimbal is that if you power it ON without a camera installed, it will shudder and shake like crazy, wasting valuable battery life and even damaging the motors. Normally, it should enter sleep mode and warn that there is no load. If you power it ON with all axis locked, it will automatically enter sleep mode, but from time to time, it tries to reinitialize itself without any warning. I hope these will be fixed in the next firmware. Also, to meet its multi-camera purpose, the L-shape mounting bracket could have more camera attachment possibilities. 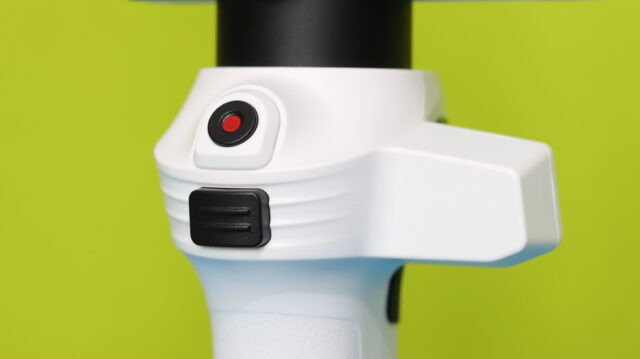 Compatibility-wise, the Moza AirCross S can accommodate almost any camera with a weight of less than 1.8 kg. I tested it with DSLR, Mirrorless, Compact, Action cam, and Smartphones, it worked well with each one. Instead, controlling your camera can only be wired without the possibility of operating your camera via Bluetooth connectivity. You can find the complete list and level of photo camera compatibility here and the action camera compatibility here.

Thanks to the comfortable grip and lightweight design, you can keep it relaxed with only one hand. Together with a Sony ZV1 and GoPro 10, it weighs about 1kg. Otherwise, the controls are simple enough, with a few buttons, the 4D joystick, and a small screen to display the current mode and other parameters. 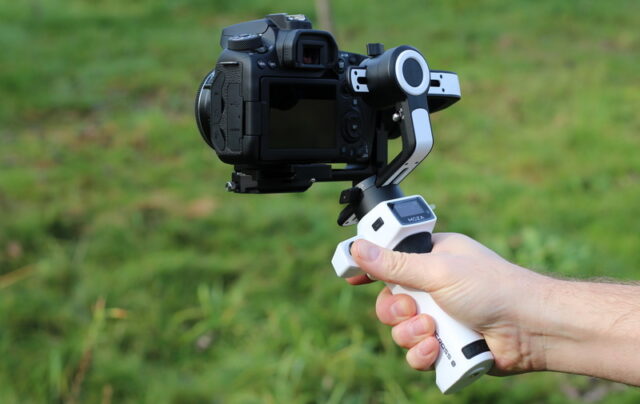 The AirCross S’ versatility isn’t just in the cameras it supports. In addition to the standard stabilization modes, it has three advanced shooting modes: Inception (360° barrel roll), Timelapse, and Dolly zoom.

AirCross S is available to order today, and like a lot of Moza products, it’s priced competitively compared to what’s out there in the market. You can order it from the manufacturer’s website for $259 in the US and € 289, £ 239, AU$ 399, or ¥ 37,500 (JPY) in the rest of the world. Intended to be affordable, there is only a standard package without deluxe combos this time. 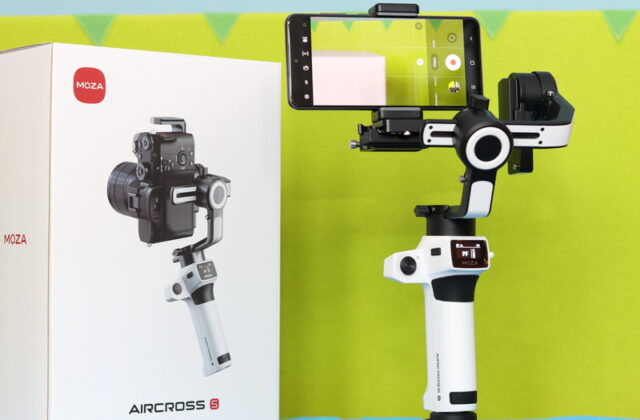 1. [One For All, All-In-One – Compatibility Is An Achievement]:

3. [Stay On Vertical Mode – Time to make your SHORTS go viral]: AirCross S takes the vertical shooting experience to a new level of individuality. Just like the previous AirCross series, no extensions or accessories are needed due to the design of the dual-layer quick-release plate. 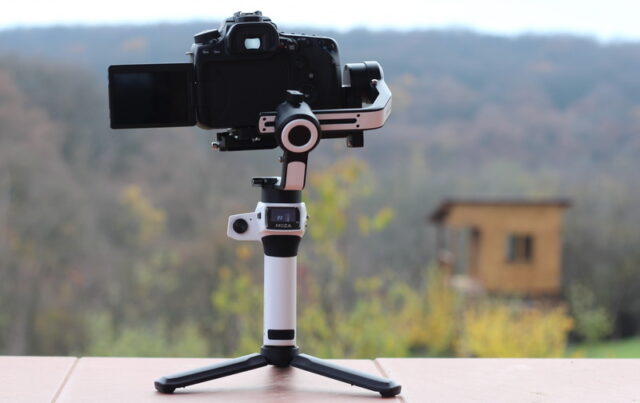 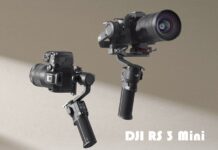