For 38 years now Seagate has been recognized as a reliable hard disk manufacturer. Looking at the company’s latest products, it shows no sign of letting up. Seagate DJI Fly Drive is a storage solution for drone operators. In addition to the 2TB storage capacity and integrated micro SD slot, the DJI Fly portable hard drive comes with two-month free subscription to Adobe® Premiere® Pro CC.

DJI Fly Drive was born from the strategic partnership between Seagate and DJI. While Seagate Technology is a world leader in storage solutions, DJI is the world’s leading manufacturer of consumer drones.

Being an IT guy, I know how important is to backup your critical data and an outstanding aerial video is this kind of data. Lets be honest, no storage media is 100% safe, not even the Seagate DJI Fly Drive. I always do at least two copies of my precious data. One on my desktop computer and one on external hard drive. 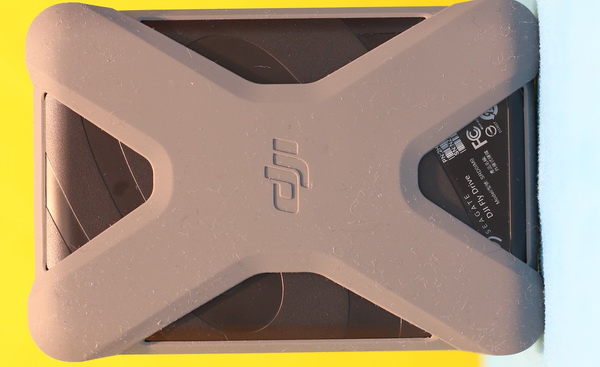 Over the last 3 years of blogging, I captured during my drone reviews over 1 TB of photos and videos. For example, a 12 MP JPEG photo captured with my DJI drone occupies about 5MB. If you want to work like a pro, you need to shoot in RAW format (uncompressed), which results in 4 times larger files. As lately, 4K became the new video standard, I expect an exponential growing of the backup space needed, hence the Seagate DJI Fly Drive’ 2TB will be filled up till the end of the next year.

Disclosure: I received this DJI Fly Drive as part of a product review collaboration with Seagate. Product specs and quality may vary according to the manufacturer’s reliability, so I cannot guarantee that you will get a drive that performs exactly the same as seen in my review.

Inside the box I found, besides the portable drive, the following: protective bumper, USB-C cable and quick start guide. By registering the product you can redeem your no-cost 2-month Adobe Premier Pro membership.

First off all, despite its name, the DJI Fly Drive doesn’t actually fly :).

DJI Fly Drive comes dressed up with a removable silicon protective bumper. The drive itself measures 122.5 x 85 x 19.7 mm and weights about 190 grams. While the back of the drive is black, the front part is charcoal gray. DJI logo is present on both, sleeve and drive. 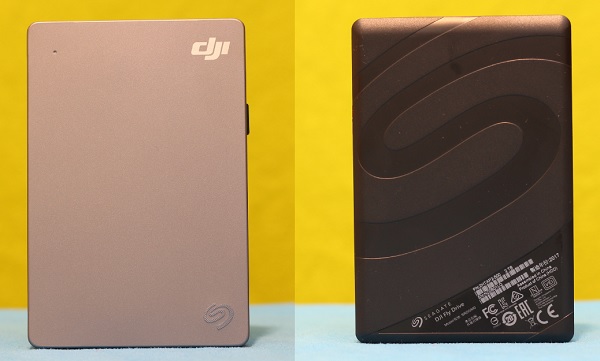 On top side of the Seagate Fly Drive is located the USB Type-C connector. I like this new standard because it allows reversible plug orientation. Micro SD slot is located on the right side of the drive. Both connector and card slot are accessible with and without the bumper.

There is a small green LED light on the front panel which indicates that the drive is in use. It is very small and unobtrusive.

Frankly, from two giants like Seagate and DJI I would have expected a more innovative UAV storage solution. Excepting the built-in micro SD card reader, there are no other differences compared to a “classic” portable hard drive. Here are a couple of features that would make the DJI Fly Drive 2 a perfect drone storage:

If you don’t own one of the latest generation of laptop with USB Type-C socket, you will need to additionally purchase a Type-C to Type-A USB 3.x cable. The cable is also required if you want to review the drone footage on your living-room TV.

Powering on the DJI Fly Drive I heard the well known noise of a classic HDD. We need to wait few more years for affordable flash based (SSD) portable drives.

The drive was instantly recognized by my Windows 10 PC. Under “This PC” I found two new drives, one called “Fly Drive” and one “USB drive” (for card reader). The 1.81TB partition is formatted as exFAT, so no worry about max file size limit. 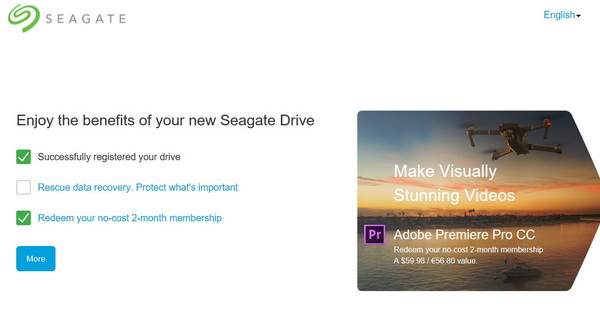 On the root of the drive there is a file called “Start_Here_Win.exe” which allows Windows users to register their product. MacBook (OS X) owners should look under the “Start_Here_Mac.app” folder.

In order to test the transfer speed (read/write) of the DJI Fly drive, I opted to use two popular HDD benchmark tools (ATTO Disk Benchmark and Crystal Disk Mark). Furthermore I did a third test using copy/paste feature from Windows (it seemed to be the most relevant for real-life usage). At the end of my review, in the “photo gallery” section, you can find screen capture of all the tests I did.

Copying back the 4GB file from SSD to DJI Fly Drive was made with an average speed of 130 MB/s, which is comparable to the reading speed. As comparison, writing on the micro SD was much slower, only 39MB/s.

Direct copy from integrated micro SD slot to Seagate Fly Drive was made with an average speed of 88MB/s. Same speed as in case of micro SD to SSD transfer. Note: transfer speed through built-in card reader is widely dependent on the performance of the micro SD card. 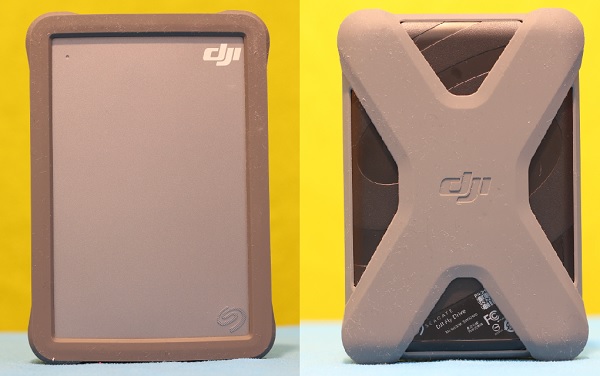 Surely, with a MSRP of $149.99, the DJI Fly Drive is not the cheapest 2TB portable drive. The built-in UHS-II rated card reader is nice feature, but I’m not sure if it’s worth the extra money.
I liked both design and build quality. The included silicon sleeve protects the drive from accidental drops and bumps. Thanks to the USB 3.1 interface, download speed is pretty fast from drive as well as from the integrated micro SD card reader.

DJI fans can find more details about this portable drive for drone footage here. Due to its spicy price tag, probably only the most fanatics will pull the trigger for such drone accessory. 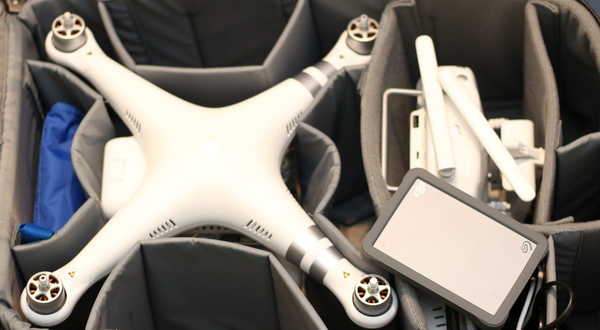