The SY X25 flying car represents the new wave, an innovative quadcopter that can ride like a car and fly whenever needed. Almost identical in design with the Syma X9, it is hard for me to decide which one copies the other one or if the difference is more than the design of the paint. The sure thing is that the X25 was the first one out on the market, so it is possible that Syma wanted to test anonymously the market to check its reaction to such toys. I was offered to review the Syma X9 too but I refused as it is almost identical to the SY X25-1.

The kids will definitely love this concept for sure, they can ride this gadget like an RC car but also fly it like a quadcopter. It seems very easy for this remote-controlled toy to go over the obstacles and provide lots of fun.

This 2 in 1 concept helps kids familiarize with remote-controlled quadcopters as they can first exercise to ride it as a car and after that slowly get it up in the air and get infected with the flying virus :)

Unlike the Syma X9 which is sold only without a camera, the SY X25-1 has a slightly more expensive version with a 2MP camera. The “luxury” of the frontal HD camera costs an extra $9.

Although I knew I had to deal only with a toy, I was curious how it behaves and how it was implemented 2 in 1 concept.

Having the box in my hand I found out that the complete name of this model is “X25-1 Space Explorer” and “Song Yang Toys” is the manufacturer.

Inside the box, besides the remote controller and the car-quadcopter, I found a small bag with one set of spare propellers, a USB charging cable, and a screwdriver.

Unlike other wheel concept designs, the size proportion between the airframe and the wheels seems to be almost real.

Meanwhile, it is advertised with a 650mAh battery, mine actually came with a 750mAh one. The battery has a JST connector and can be charged without removing it via any USB port (phone charger/computer USB plug).

At first sight, the airframe is made from some cheap plastic and the tires from some kind of sponge, not rubber. The size of the aircraft is about 24 cm long and 16 cm wide, I don’t know why but I expected it to be bigger. In order to test it, I quickly read the SY X25’s user manual to see how can I remotely control it.

When I pushed up the right stick the X25 started to move slowly ahead and after 1 meter of the journey, it gained some speed. The wheels are no longer engaged after the throttle stick is pushed up and the propellers began to spin. In the air it performs surprisingly well, it is very fast and responsive.

As you can see in my unboxing and quick test video, only the rear wheels are rotating and the front ones are for giving the direction in car mode.

Usually, I never test indoor the stunt mode (360-degree flips), but accidentally I engaged it when the quad was one meter above the ground. The SY X25 raised a bit (about half of a meter) and executed perfectly a 360 degree rolling without losing too much height. 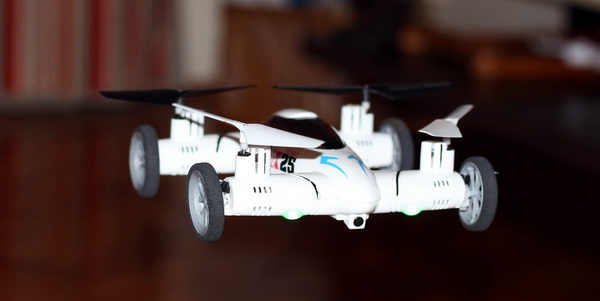 Unfortunately, as in my country was announced one week of rainy days, outdoor test flights will have to wait till next week.

The transmitter comes with the usual key and stick layout and unlike what I thought there is no button to switch between drive and flight mode. Leaving aside the left control stick (throttle) the SY X25 quadcopter can be controlled with the right stick as it would be a car. Push up the right stick and will move ahead, push down, and will move forward. The direction can be adjusted by moving the right sick to right or left. When the X25 car-quadcopter is in the air, both sticks behave like on a regular mode 2 transmitters. The upper left button has two functions, by short pressing can be switch between Low and High-speed rates and by long pressing can be turned ON/OFF the LEDs light. 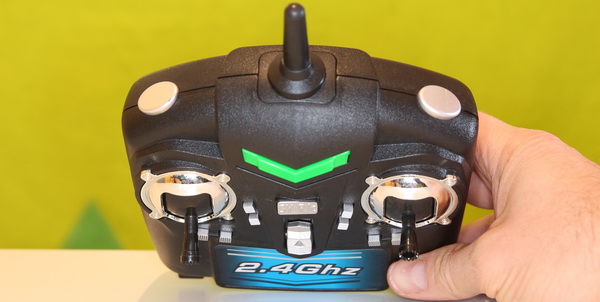 The SY X25 and the Syma X9 come with a new concept which tries to target the younger generation of remote-controlled toy enthusiasts. Frankly, I was positively surprised by this toy and probably I will play with it a few more times together with my son to color up some boring cold days of winter.

This car-quadcopter was offered by Banggood for a fair review, thanks again for their attitude and for giving me the chance to test this interesting product.