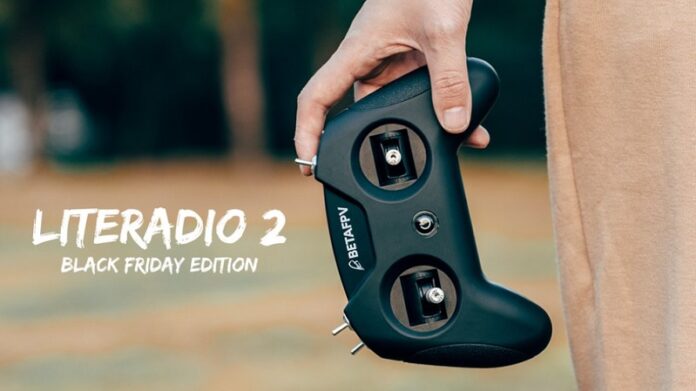 Price for only $50, the BETAFPV LiteRadio 2 is currently the most affordable FrSky compatible 8 channel drone transmitter. It features a similar game controller style design to the Jumper T-Lite. It is available in white and black colors, with a mode2 stick assignment (throttle on left).

The front panel of the BETAFPV LiteRadio 2 remote controller is very clean just the power button and the two joysticks. On each side of the transmitter there two shoulder switches. Setup and Bind buttons are located on the back. The RC is powered by a 2cell 350mAh LIPO battery. As no status screen, all the configurations must be done from your computer via OpenTX computer-based graphical user interface.

Thanks to the USB data port, it can be connected to your computer and used with drone simulators like LiftOff. The RC also has an audio port for student mode.

Just a few weeks after the LiteRadio 2 was released, BETAFPV brings on the market an upgraded version named LiteRadio 2 SE. Find in the table below a comparison of these two editions.