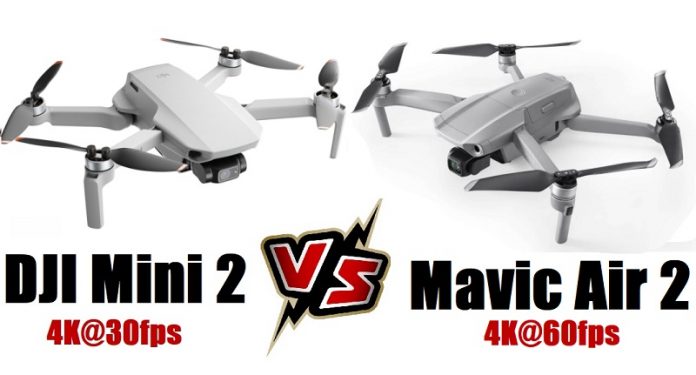 Today we will have a closer look at DJI’s latest two drones, the Mini 2 and Mavic Air 2. While both features foldable design, a 4K camera, similar remote controller, identical long-range OcuSync communication, there are still many significant differences. So how do you go about choosing a winner in the DJI MINI 2 versus Mavic Air 2 debate?

Both drones were released in 2020, with about 7 months of delay between them. The Mavic Air 2 was revealed on April 24 and the Mini 2 on November 4.

For sure, the MINI 2’s signature is its super-low weight. The DJI MINI 2, weights more than two times less than the Mavic Air 2 (249g vs 570g). There is also a visible size difference between them. With folded arms, the MM2 measures 138×81×58 mm and the MA2 180 × 97 × 74 mm. Here I should mention that in most countries including the US, drones below 250 grams do not require registration when you are using them for recreational purposes.

In the table below I compared the most important specs of both foldable DJI drones. I highlighted with red where the new DJI MINI 2 excels and with blue where the bigger Mavic Air 2 shines.

While both are advertised with a 4K camera, their performance differs a lot. The MINI 2 uses a 1/2.3″ image sensor and the Air 2 a 1/2.3″ one. Usually, a larger sensor means better image quality and improved low-light performance.

The Mavic Mini 2 is powered by a 2-cell/2250 mA battery and it has up to 31 minutes of flight time. Thanks to its higher capacity LIPO pack (3s/3500 mAh), the Air 2 has up to 34 minutes of battery life. Both are available in ‘Fly more combo‘ package option with 3 flight batteries which give you a total flight autonomy of more than 90 minutes.

Both drones are packed with the new, redesigned remote controller. Featuring the same pro-grade OcuSync 2.0 communication, they have identical flight range too. In FCC mode you can achieve up to 10KM and in CE mode up to 6KM.

As you could read in our Mavic Air 2 review, its obstacle avoidance system performed very well. The drone was able to follow the subject autonomously while it ran through the trees. This is what you can’t do with the DJI MINI 2. Featuring HDR, Hyperlapse, and a higher frame rate is ideal for photographers and videographers. The Air 2 also has better battery life and flight performance compared to the Mini 2.

On the other hand, weighing less than 250 grams, the M2 does not require FAA registration. Practically you can fly it out of the box. Its 4K camera provides not just decent video quality, but actually the best quality that you can get in its niche. It’s small enough for all the jobs, versatile enough for most of the tasks.

Who is it for the Mavic Mini 2?

Who is it for the Mavic Air 2?