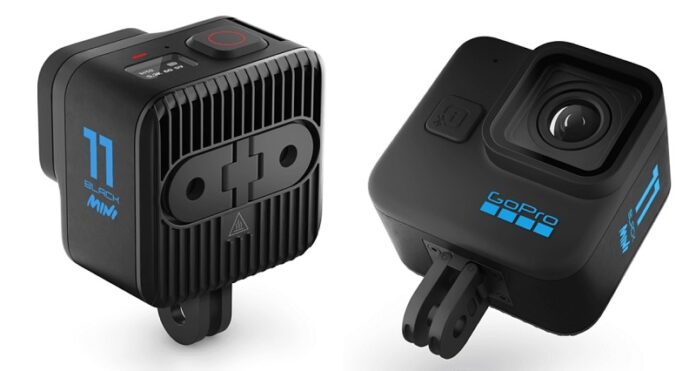 The official announcement of the new GoPro Black 11 Mini camera is scheduled for 14 September 2022. By accident, a Spanish consumer electronics store already offers it for preorders. They revealed all the essential features and technical specifications of this new compact drone camera.

According to the teaser video below, the 11 series from GoPro comes in two sizes. In a standard form factor -probably identical with the GoPro 10 and a more compact size named ‘Mini’ that seems to be a successor of the discontinued ‘Session’ series. It seems that both of the 11-series models will use the GP2 processor from last year, which can handle 5.3K video at 60fps, 4K at 120fps, and 2.7K at 240fps. It can also do live streams at 1080p. HyperSmooth stabilization will be updated to v5.0.

The most significant difference between the GoPro Hero 11 and the GoPro 11 Mini is around the display. While the full-size GP11 comes with two displays (selfie/front and primary/back), the GP 11 MINI comes without any live-view screen. It has only a tiny LCD on top for settings and configuration. When you use an action camera installed on a drone or on top of your helmet, the LCD screen is practically useless. I think GoPro designed their new compact action cam for these scenarios.

According to the rumoured price, the new GoPro Hero11 Black Mini costs 449 euros in Europe, which is 100 euros less than the “normal” Hero11, which costs 549 euros. The Hero 11 MINI will be available for orders starting on 25 October!