Unfortunately, with only $300 in your pocket, you can’t afford a DJI drone, but there are still few nice drones that you can consider. Today, we will compare two of the most popular 4K drones that you can buy in this budget on Amazon. Our Ruko F11 vs Holy Stone HS720E comparison covers features, range, and battery life.

I will start with the Ruko F11 GIM, which is basically rebranded SJRC F11 4K Pro. It does not just have the same design but also almost identical features. As you could read from our review, the F11 series has been permanently improved over the last few years. The F11GIM’s 4K cames comes installed on a 2-axis gimbal. In addition to mechanical stabilization, it also features electronic image stabilization (EIS).

The HS720E is a very nice-looking quadcopter, it is made from high-quality plastic and has a premium feel to it. Like its contender, it also has a stabilized 4K camera. With folded arms measures 172 x 104 x 56 mm and comes with a pretty cool travel-friendly case.

The most important difference compared to the Ruko F11 GIM, is its bottom camera which serves as an optical flow sensor. Being powered by a 2S 2800mAh battery, the Holy Stone HS720E drone has about 22 minutes of flight time.

In the table below, I tried to compare the most important specs of both 4K drones. I highlighted with red where the F11GIM excels and with green where the HS720E shines.

While the Rukon F11GIM is powered by a 2500mA, 3cell battery, the HolyStone HS720E by a 2800mAh LIPO pack. The higher power battery allows about 5 minutes extra flight time for the F11GIM compared to the HS720E. Both batteries are charged via a micro USB port, which takes more than 5 hours. Both drones can be purchased in a bundle with 1, 2, or flight batteries.

Despite that, these two drones are using the same transmitter (at least apparently) they have a different advertised flight range. The F11 GIM 4K has 1500 meters (1 mile), and the HS720E only 1000 meters (0.62 miles). 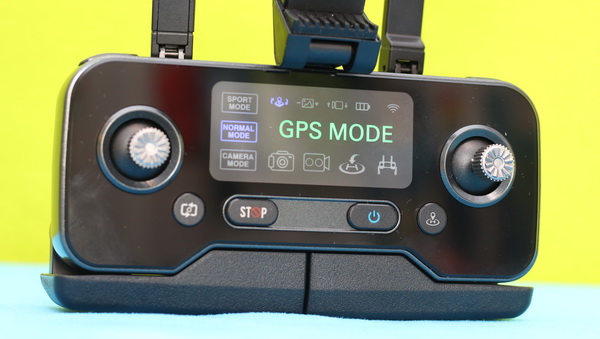 The remote controller included with these drones has a nice piano black finish with an onboard status display and folding antennas. The LCD screen provides telemetry information such as GPS mode (ON/OF), Flight mode (Sport/Normal/Camera), camera status, and RTH. More flight parameters (speed, altitude, distance, and battery level) are provided via the mobile APP. The RC is powered by a built-in battery which lasts a couple of flights easily.

Both of the drones are amazing for their price. They have similar flight characteristics and camera performance. I would highly recommend them to anyone who wants great value for their money!

Remember that weighing about 500 grams, both drones need to register in order to fly legally in most countries, including the US, and Canada.