Yesterday, when I received the Cheerson CX-10W for review and I sow the size of the package I knew it would be my shortest review and basically useless to make an unboxing video :)

The CX-10W is the 3rd generation of the Cheerson Hobby mini quadcopter series. The first model of this series, the CX10 was revealed about two years ago. Even if it was offered without a camera, everyone was surprised about the size of the aircraft. In order to make this micro quadcopter more attractive, the second generation was equipped with an onboard camera. When I received the CX-10C for review, one of my friends asked me if it has FPV mode. That time I smiled at his expectation from such a tiny quad.

A few years ago it seemed unimaginable the FPV flying with such a small multirotor like this Cheerson CX-10W. Now, we don’t even need a physical transmitter to pilot them because they can be controlled with our smartphones. Of course, this fact helped to dramatically reduce the overall production costs and a great thing for ecology.

I will start my review by thanking James from Banggood who offered me this nice toy in order to test it and write my impressions about it. Probably many fellows will consider it some kind of a waste of time to play with such a basic model but I think every model has its own fun.

Unlike its predecessor, the CX-10W is available in three colors, golden, silver and rose-red. I miss some truly flashy colors which makes it more visible and easy to find when it lands in high grass. My son was not too happy with the rose-red color but he quickly passed over this issue when he saw that it can be controlled with his tablet.

As previously mentioned the CX-10W is packed in a small 85 x 85 x 40 mm cardboard box. Besides the tiny aircraft, the package includes one set of spare propellers, a USB charger, and a user manual. Yes, there is no transmitter included and you will need a smartphone to pilot this Cheerson WIFI quad.

The total weight of the aircraft is around 17 g which makes it probably one of the world’s lightest FPV quadcopter.

The design of the aircraft is very similar to the one the previous models have, excepting the big “WIFI” logo from the top of it. On the right side of the mini-drone are located the ON/OFF power switch and the tiny charging connector.

In order to allow a better orientation in low light conditions, on the front arms, there are blue LEDs and on the rear arms, the LEDs are red.

Maybe it looks weird or like something is broken but those two pieces of wires that came out from the CX10W serve as Wi-Fi antenna. 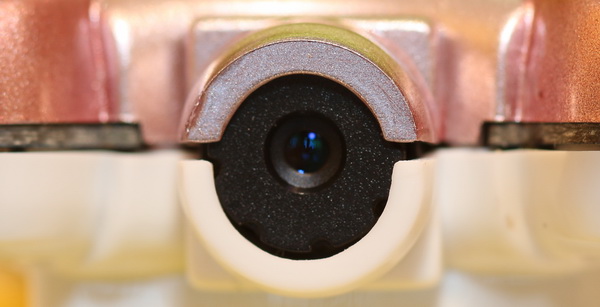 The onboard camera allows capturing photos and videos with a resolution of 720 x 576 pixels. One minute of video with 16-bit mono audio occupies about 60MB and resulting in about 200 MB files per flight. This CX-10W doesn’t require a micro SD card like its predecessor because the captured files are stored on the smartphone’s flash memory, in the folder named “WiFiUFO”.

Of course, we can’t expect brilliant image quality from this tiny camera, but after few tests, I can say that is pretty good according to the price and size of the CX10W (check the sample photos at the end of my review).

The camera’s real-time video feed can be displayed on the smartphone’s display through the “CX-10WiFI APP”. This mobile application can be downloaded for Android devices from here and for iOS from here.

Unfortunately, the FPV has some lag, but anyway, the controls are overlaid on video and it is difficult to fly the aircraft in first-person view mode. 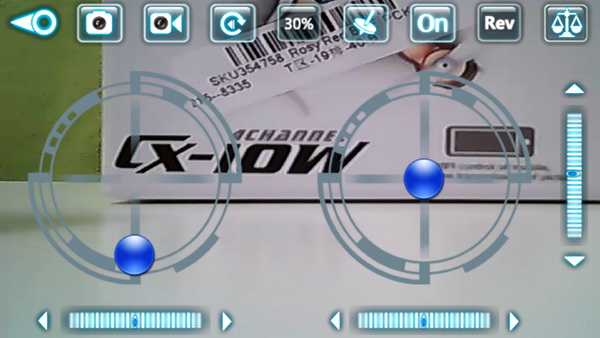 In order to test the flight capabilities of the CX-10W quad, I had to install on my smartphone the previously mentioned app.

Binding the phone with the aircraft is very simple. After the quad-copter is switched ON, a new open network called “CX-10W-8ffacb” will show up on the list of the accessible WIFI connections. The next step is to select and connect to this network and run the CX-10WIFI App.

By default, the virtual controls function in mode2 with the left stick as a throttle. The flight direction of the aircraft can be controlled with the right control stick or through the smartphone’s internal gyro-sensor by tilting the phone. Practically, the Cheerson CX-10W can be controlled like we play a mobile game, children will surely love this feature.

The advertised control distance is up to 25 meters, which I think is fairly enough for such a small and inexpensive toy.

For now, I test it only indoors where is very stable and easy to hover. Controlling it through the tilt of the phone is really fun. If need it, the flight speed rate can be switched between 30, 60, and 100%. Later I will upload some test videos to show the camera’s image quality.

My only disappointment regarding the Cheerson CX-10W is around the flight time. With a fully charged battery, it has about 3-4 minutes of playtime. Anyway, spending $33 on this toy is not a bad idea considering that is a nice indoor flyer just perfect for some office relaxing time. Those interested to give it a try with this micro FPV quadcopter should know that it can be ordered with 18% discount from here. An important fact is that spare parts are available and are relatively cheap, a complete set of propellers costs about $1.60, and a new battery $2.90.

Images with the CX10W quadcopter