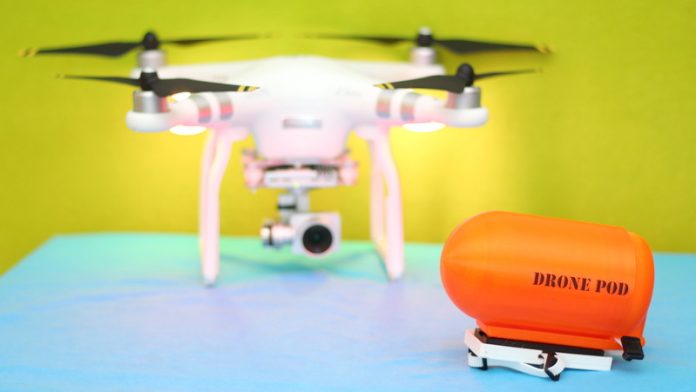 Few weeks ago, the whole media was covered by a news regarding a supposed drone attack at the Gatwick airport. About 1000 flights have been cancelled and even the military was involved to solve the “situation”. Think about what kind of mass hysteria can be caused by a drone with an orange bullet shaped cargo on top of it. Even if the Drone Pod was designed to deliver critical goods like medicine, it can be considered a threat if it is used irresponsible. Luckily, the Gatwick “situation” ended fine and everyone arrived home safely till Christmas night :) 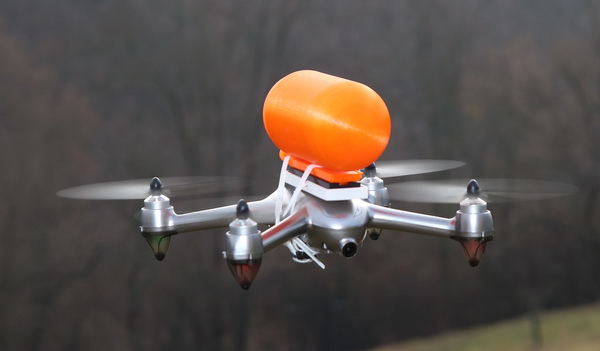 Designed for consumer quadcopters, the Drone Pod can accommodate only smaller things. Due to its simple but effective “Flight Strap” system, it can fit to almost any commercially available drone. The manufacturer claims that “Drone Pod is compatible with all drones that have enough clearance between the rotors over the fuselage.” According to Gerry from DronePod, they have had no reported failures to mount, or flight failures (till now I would say).

Disclosure: I received this quadcopter cargo system as part of a product review collaboration with Drone Pod. Although the product was a gift, all opinions in this review remain my own and I was in no way influenced by the sponsor.

First of all, Drone Pod is not certificated by any drone manufacturer (yet), so use it at your own risk. Improper installation of the cargo system can result in damage to your drone, people around you, or yourself!

I received the package after more than 50 days since it was shipped out. I started thinking that it is lost. Inside the box I found the Drone Pod with two pre-installed straps and another two extra straps for larger flying machines.

From the first sight it was obvious that the Drone POD is entirely 3D printed as the parts are not perfectly finished. The cargo compartment has nice orange color and bullet shape. While the external size of the container is about 8 x 13 cm, the loading space measures about 7 x 12.5 cm. The whole system (with all 4 straps) weights about 200 grams (0.44 pounds).

The cargo mount has 2 parts, a softer one (white) which is in contact with the drone and a stronger one (black) in which the container slides in. You are able to secure with straps the mount as well as the container to the drone’s fuselage. The cargo tank is threaded into the base unit (see image bellow). 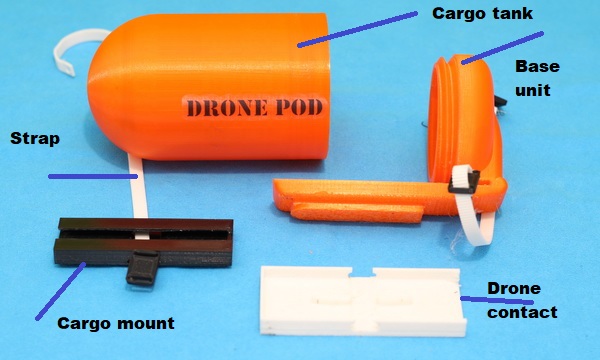 Installing the Drone Pod on my Phantom 3 Advanced took about 30 minutes. It was more complicated than I thought it would be. Because the straps have only ~15 cm, you need to chain them. Frankly, I’m not completely OK with the mounting system, it did not felt super safe.

My plan was to load a spare battery into the cargo tank, but unfortunately it is to narrow. Finally, I decided to fill the tank with nuts :D. In case you want to load small and heavy objects, I suggest to fill the rest of the space with a piece of paper or foam in order to prevent unwanted movements inside of the container. 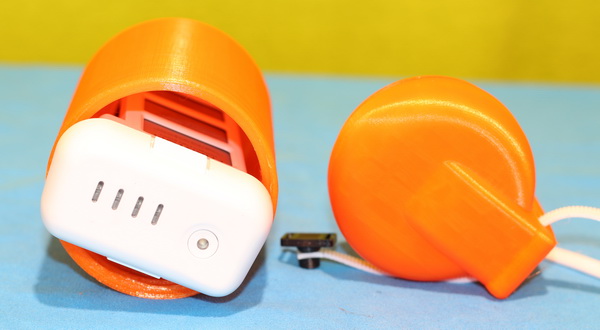 Take-off was smooth. I could feel the extra weight, but some extra throttle solved the issue. Being afraid regarding the possibility to loose my drone, I did only a short flight around the house. I was lucky to catch a calm day, so flight performance was quite the same as it would’ve been without the package on top. Anyway, in strong wind, I would’t use it because it would probably act like a sail.

I didn’t noticed satellite coverage issue (I had good GPS signal), but this can widely depend on the goods you load into the container. 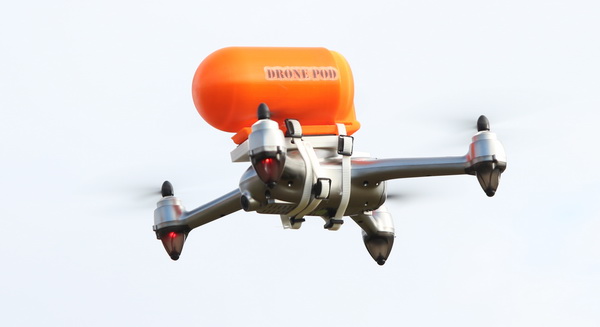 I also did a second test with my MJX Bugs 2 SE drone. This time the installation was much easier. Even if it is a less powerful quad, it was able to take-off and fly with the Drone Pod. The extra weight reduced about half the total flight time.

Who’s and what’s for the Drone Pod?

Basically the Drone Pod is for everyone who wants to deliver small things using their drone. It is suitable for personal as well for commercial usage. In some situations can be a life saving drone accessory. Here are the manufacturer’s suggested applications: 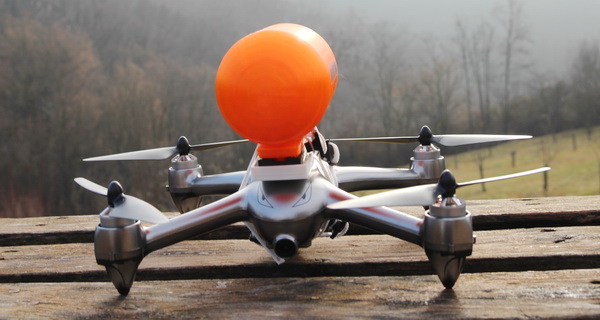 In addition to the above things, I found some other ways to use this drone equipment:

Before you are thinking that $29.95 is too much for an orange plastic bottle, you should know that it takes about 26 hours to print all its parts.

If you are into drones and you want to deliver something small for a short distance, you can get the Drone Pod from here.

In a nutshell, the concept of the Drone POD, is great! It allows to transport small items using your quadcopter. It is compatible with most commercially available quadcopter.

My only concern is regarding the “Flight Strap” system, if it fails you can lose not just the cargo, but also your precious drone. IMHO, in order to offer more trust in this product, they should obtain some certification from a big drone brand like DJI. 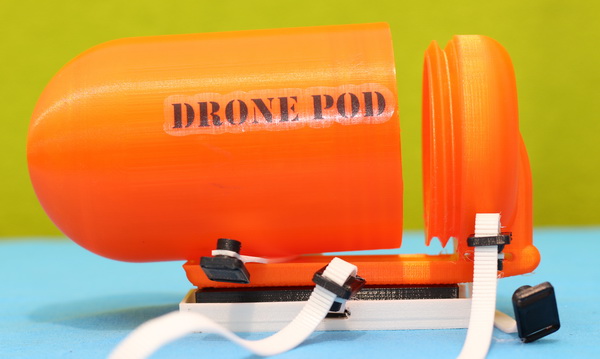 2019 comes with the second Giveaway on FirstQuadcopter. We agreed with Drone Pod that they will sponsor this action by sending for free their drone cargo system to the lucky winners.

In order to enter to the contest you just need to drop a comment about “for what you could use this drone accessory”. The contest will be closed in 3 weeks after we published our Drone Pod review.

We will have two winners. First one will be selected randomly using Random.org and a second one which wrote the more funny/interesting suggestion.

Materials used to made the Drone Pod

Being new into the 3D printing stuff I asked the manufacturer what type of filaments they used to print the cargo system. They need it to make it lightweight and durable. Here is the description received from Gerry: 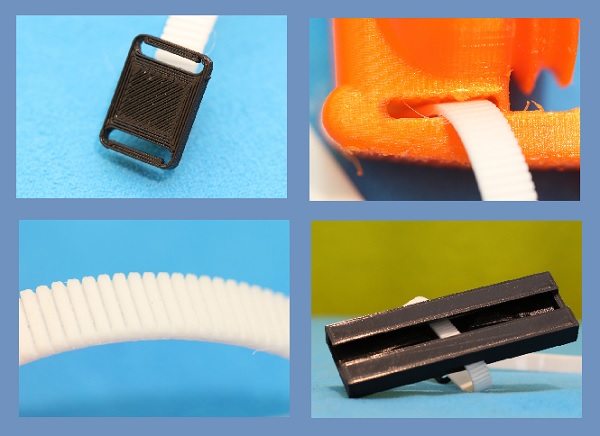 1. Drone Pod Fuselage – Made of Orange Translucent PETG – We did this for lightness and visibility. The interior walls are 10% infill making the cargo section as light as is possible. Its more like a plastic shroud.

2. Drone Mount – The section that attaches to the DronePod and sits on the top of the drone.
a. Contact point = Thermoplastic Polyurethane (TPU) – The white section is made of a rubber like material to create a sticky suface for the Drone face to contact. This helps prevent slippage during flight.

c. NOTE: Both pieces are NOT glued together and fit via a compression fitting. This is so that should there be an in-flight failure of the cargo pod, all pieces should unsnap and fly away from the drone. Attempting to prevent the Drone Pod from also crashing the drone.

4. Buckles – These are made of Polycarbonate – The buckle is designed to defer itself as a point of load bearing, and instead use the strap to create a compression fitting between the ridges in the strap and the two slide points in the buckle. When deployed, the load is transferred to the compression strap and thus the contact point of the mount.

All the filament I used is there to create a condition for Drone Pod to work with. TPU for compression and slippage. Polycarbonate for rigidity and strength. PETG For accuracy, lightness, and color.

It was a great project and we are hoping Drone Pod will sell enough that we can continue to innovate with the platform. 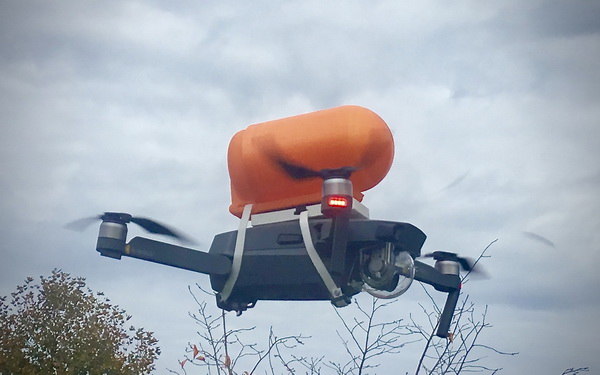 After I tested the Drone Pod, I have few personal suggestion which could make even better this drone accessory:

Once again: use this product only at your own risk!