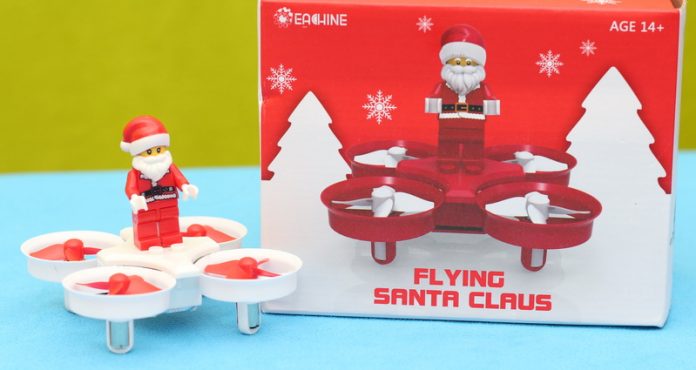 It seems that this Christmas, Rudolph, the red-nosed reindeer, remains without a job. Santa Claus will fly through your chimney with the Eachine E011C drone :)

Over the last few years, drones became extremely popular. From kids to retirees, passionate about remote controller toys would love to find such gadgets under their Christmas tree. Eachine E011C is not just a simple toy drone. Thanks to the Lego-style Santa Claus figure on the top of it and Christmas songs playing when is in the air, will succeed to bring the feeling of Christmas evening into your homes.

In order to be safe for kids, Eachine equipped the E011C with large TinyWhoop alike blade protectors. Anyway, in my opinion, children under the age of 14th should be always supervised by adults when they are playing with such toys. Also, be aware that kindergarten children can accidentally swallow smaller parts of the Santa figure.

I will start my E011C review by thanking Banggood for offering me this nice Flying Santa drone. I also appreciate their continuous support and professional attitude as they never tried to influence me in writing my quadcopter reviews.

The timing was just perfect, I received the Eachine E011C exactly one month before Xmas. Like the drone, the box also inspires that we are dealing with a Christmas gift. Besides the 65 mm sized aircraft and its remote controller I found inside the box the following: flight battery, USB charger, 2 pairs of spare propellers, screwdriver, user manual and of course the Santa Claus figures.

The one I received has a white frame with red propellers, but you can opt for red frame with white propellers as well.

Like a veritable Lego® Minifigures, Santa Claus needs to assemble. Santa can stand or sit on top of the drone. It can be easily attached to the protective canopy. 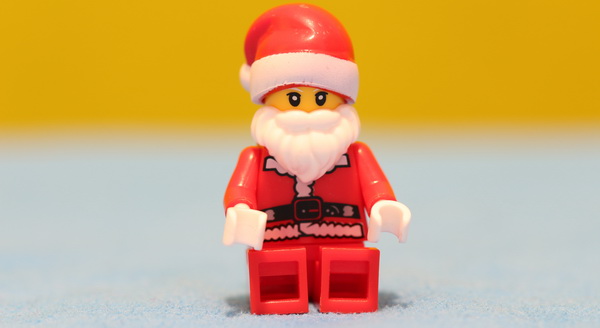 Powered by a 260 mAh battery, the advertised flight time is about 5 minutes. IMHO, taking in consideration the almost 40 grams take-off weight, 3 minutes of playtime is more realistic. Anyway, the battery is exchangeable so you can have an almost endless fun time :)

Same as the Eachine E010 Mini, the E011C has only two LED lights. Red one in the front and blue one on the back. Speaker is located behind the battery bay.

The white/red remote controller with the size of only 10 x 6 cm may be a little small in my hands, but all the controls can be easily accessed even by adults. RC is powered by 3 pieces of AAA batteries (they are not included).

Besides the usual control sticks and power button, there are only 3 trim switches on the front panel. No shoulder buttons.

While pressing the left stick (throttle) such as a button you can enable the headless mode, pressing the right stick in the same way you can activate the 3D flip mode.

By long pressing the right stick, you can toggle between “Brick block mode” and “Power saving mode”.

Calibrating the E011C drone can be done by moving both sticks to the lowest right position.

As soon as the battery is connected, jingle bells song starts automatically. The first few flights were OK, even funny, but later became pretty annoying. Checked all the button combinations, no way to turn-off remotely the loudspeaker. 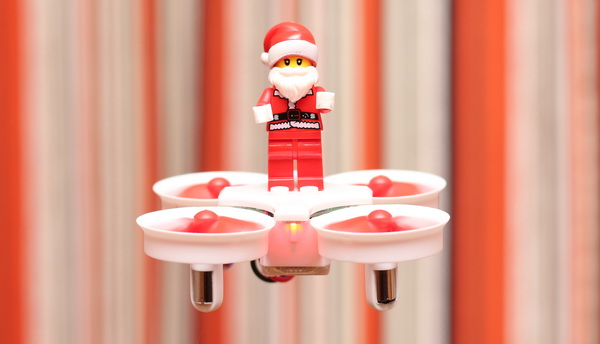 Surely, with Santa Claus on top of the E011C is not the most responsive machine. Also, the flight time is decreased by the extra weight. Without Kris Kringle, it flies much better. Unfortunately, the lack of altitude features makes it harder for newbies to fly around the Christmas tree.

With stock RC the range is about 40 meters. By adopting Bayang radio protocol it can be also controlled through universal transmitters like the Jumper T8SG.

Whether you are looking for a nice Christmas gift for your kids or want something that brings the Xmas atmosphere earlier, the Eachine E011C is a great option. Featuring 6-axis gyro stabilization, it can be easily controlled even by kids.
After the winter holidays dads can modificate it into a cheap FPV trainer drone by adding a 5.8G AIO camera.