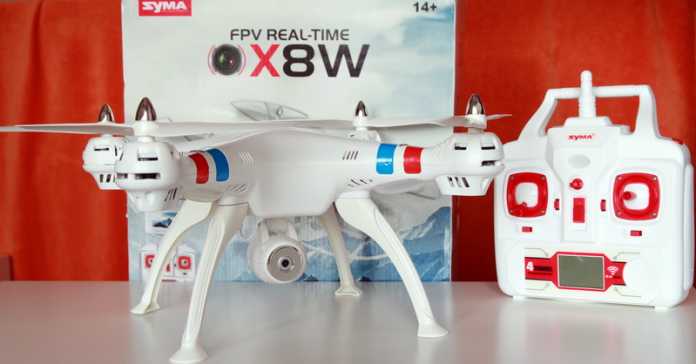 I tested lately a lot of small and beginner quadcopters and finally, I received a bigger one, the Syma X8W, which is probably one of the best mid-range quadcopters. Small quadcopters are good for indoor fun, beginner pilots, practicing, etc. The mid-sized quadcopters are an intermediate step to professional ones as they can do almost all the tricks and are available at affordable prices. Of course, you can’t expect to get a GPS system for the price of a Syma X8W (which is around $115) but you will get enough power to lift a GoPro camera and decent flight characteristics and range.

I dream about shooting incredible videos and pictures of nature and cities with a professional quadcopter like the DJI Phantom 3 but I am conscious that I need to practice a lot in order to realize my dream without throwing a lot of money on the window (and, I’m sure, unleash my wife’s “mouth” over my head). I feel that the practice with this Syma X8W quad will bring me closer to my goal.

The Syma X8 family has 3 models, the X8C that comes with a 2MP camera, the X8W that has a 2MP Wi-Fi FPV camera, and the latest X8G that steps to the next level with the 8MP GoPro alike camera.

This Syma model was announced a few months ago and I already wrote an article about it. Because I don’t want to repeat my self I will skip over the X8W specs and features and I will jump directly into my review. 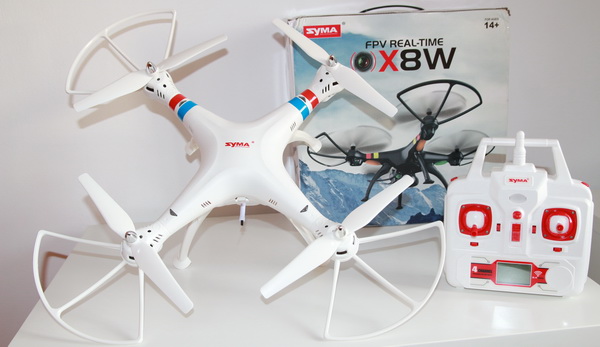 My first impression was: WOW!!!. The package was well organized inside, everything was carefully fixed with tapes and the build quality was surprisingly good for a Chinese quadcopter in this price range. The design definitely reminds me of DJI Phantom. The X8W doesn’t just look good but it’s also very robust, holding it in my hand I don’t have the feeling that it could fall into pieces like other cheap models. My first quadcopter was also a Syma model (the X5C for $70), the evolution is significant. I admit that the X8W is a bit more expensive but the quality of the two cannot be compared. I think that the main goal of the designers from Syma Toys was to create an easy to fly and good looking quadcopter.

The package contains all the usual things like: remote controller, battery charger, battery, 2 set of propellers, landing skids, screwdriver and user manual but no card reader and memory card as it is mentioned on the seller’s website. After a careful look at the camera, I found out why because it doesn’t have any memory card slot :(.

The X8W’s transmitter is unusually big and it comes with a clip that allows attaching your smartphone on top of it. The RC’s battery compartment is designed for 6 pcs of AA batteries but for functioning it requires only 4 of them. The left top button has dual functionality:

– press shortly and you switch between beginner and advanced mode;

– long pressing and you can activate the headless flight mode.

The X8W is powered with a 2 cell (2s) 7.4 2000mAh Li-Po battery that allows more than 10 minutes of continuous flight. Li-Po batteries with multiple cells must be charged with balance chargers for optimal functionality and longer life. For this purpose I already own a SkyRC iMAX B6 Mini but probably the included Syma balance charger will be just as good. A second spare battery can be a good idea considering that a full charge may take longer than 3 hours (the stock charger’s output is rated at only 800mA).

The 2MP camera has the approximate size of a walnut and a tiny wire that comes out from it (that serves as antenna) indicates that we are dealing with a wireless camera. In order to connect your smartphone to the Wi-Fi camera for a first-person view flight, you must install the Syma FPV application (available for both Android and iOS devices). I will not talk too much about the camera because I’m planning to use the X8W with another camera.

When I receive a new quad-copter I’m always excited as a child and I can’t wait to do the first test flights to see how it performs.

In order to prepare the X8W for the first flight, the following steps need to be made:

The Syma X8W is not a racing quad so it will not break any speed records :). If you are interested in something faster and more agile, you should check my X6 review. The X8W quad is more famous for the stable flight that is absolutely necessary for aerial filming.

The headless flight mode has recently become widespread and of course, that can be found on this model too. It can be activated by long-pressing the left shoulder button. In this mode, the heading of the aircraft is ignored. Regardless of which way the quadcopter has turned, the X8W flies in the same direction as the position of the elevator stick is (right stick in mode2).

An awesome feature of this model that allows making 360-degree flip is called “3D Eversion” and can be activated by pressing the right shoulder button. It is pretty impressive to see a large-sized Quad doing such a trick.

I just saw a video with a guy who tested the range of the Syma X8W and he achieved 390 meters in an open field without any range hacks. For now, I tested it only indoors and I can’t confirm that range. BTW, is there anyone who tried to hack/mod the X8W’s received board or transmitter’s antenna?

Later, I will go out to make some outdoor test flights and I promise that I will make some videos with it. Not even 1000 words about how it flew can’t beat a real flight test video…

This model is also called the poor man’s Phantom :). Why? Because apparently, it has the same design and almost the same size. The control range is more than you need for a GPS-less flight and of course no mission planner or other fancy things. The build quality of the Syma X8W is very good and it has enough power to lift any action camera (with weight up to 80grams), don’t ask about the gimbal support if you don’t want to torture it. What else can I say? Maybe that the Syma X8W is probably the best mid-range quadcopter under $120.

I ordered the white version of the X8W but it can be also purchased in orange or black color for $119 from Banggood’s website here (latest version “H” with alt-hold!)

In order to improve the flight range of the X8W, I’m planning to add a true 5db Wi-Fi antenna to the receiver board and to the transmitter.

Another mod that probably I will do is to paint in red the front propellers and maybe to add a powerful LED light in the rear of the quad to make it more visible. The biggest problem of beginner pilots (like me) is to determine the correct position of the aircraft. During long-distance flights, sometimes, I’m confused about which is the front and rear of the quadcopter.

I’m planning to replace the 2MP stock camera with a 2.7K action camera, this is the first step to make some quality aerial footage. In order to install my Blackview Hero 1 camera on the X8W, I already purchased a very lightweight carbon fiber action camera mount with damping balls. Now, I have to look at how can I attach it under its belly. I could use screws or 3M self-adhesive tapes, any idea which would be better and safer?

To protect your investment I recommend adding a Li-Po battery monitor (low voltage buzzer) to the Syma X8W. This will warn you with noisy beeps when the quadcopter’s battery is almost empty so you can safely land before dropping like a stone from the sky, especially when the aircraft is equipped with a “heavy” action camera.

Images with the Syma X8W quadcopter