Following the success of Visuo, Eachine also announced their own Mavic Pro clone. The E58 follows similar foldable design as the much expensive DJI drone. Of course, the specifications are much poorer and comes with less reliable brushed motors instead of brush-less ones.

Thanks to the barometric air-pressure sensor, the Eachine E58 quadcopter is capable to autonomously maintain its flight altitude at the desired level. Headless mode is another feature that makes flight more easy.

Eachine advertises the E58 drone in two variants. One with 0.3Mp camera and one with HD 720P camera. Both versions are powered by the same type of 500 mAh Li-Po battery.

Additional to the included remote controller, the Eachine E58 can be also controlled through smartphone APP. Kids will love to control the aircraft movements through their phone Gyro sensor.

During night flights you will be guided by 4 LED lights, one under each arm. Like the VISUO XS809HW, the Eachine E58 also has two additional frontal lights which helps newbies to track the orientation of the aircraft.

Now, during Banggood Xmas sales, you can find it with 2MP camera and 3 batteries for $54.99 (including free shipping). Spare parts (like: motors, camera, flight controller, fuselage), transmitter and carrying case can be found here. 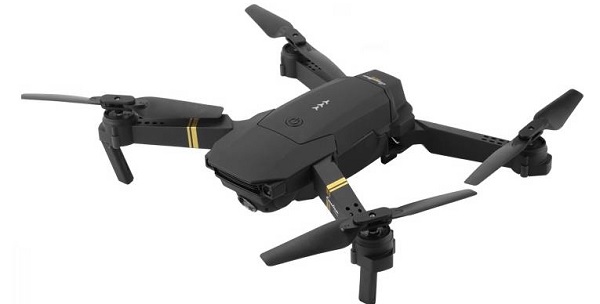