Like many cheap Chinese quadcopters, the FQ777 FQ40 also copies the design of a DJI drone. Same as the Eachine E58, renting the design of the popular Mavic Pro, the FQ777 FQ40 wants to imitate the newer Mavic Air. It adopts similar design lines and colors. In front, instead of the collision avoidance sensors it has two LED lights.

In addition to the attractive look, the FQ40 drone comes with all the latest toy drone features. Thanks to the barometric air-pressure sensor, the aircraft is capable to maintain autonomously its flight altitude.

According to the manufacture’s specs, the 800mAh battery allows about 12 minutes flying time. Frankly, not bad from a 40 bucks drone. 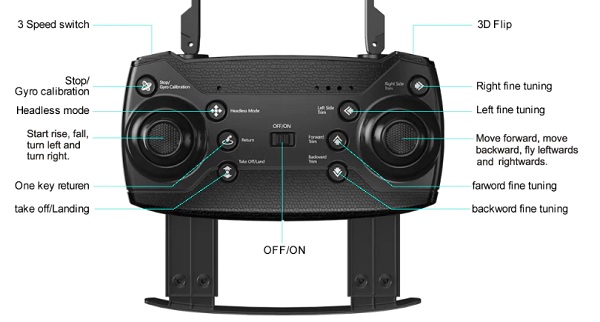 As you can see in the image above, even the FQ777 FQ40’s remote controller follows the DJI’s design. It comes with similar phone holder and foldable antennas (probably fake ones).