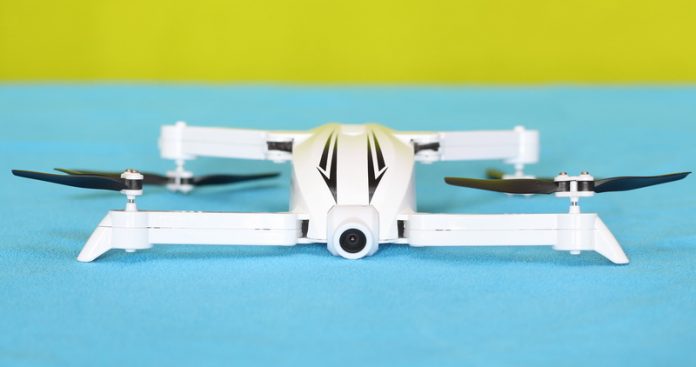 In order to bring something new on the selfie drone market, the Flytec T13 adopts half-reversed propellers. On front, the propellers are as usual (above the arms), but on rear they are orientated to the ground (under the arms).

Yesterday, one of my friends suggested that it would be more helpful for my readers to write some drone buying guides than to review every “toy drone”. He is partially right, because at first look, excepting the different design, there are no much differences between the Flytec T13 and other similar selfie drones.

When you choose your first drone, in my opinion, you should limit your budged to 50 ~ $100. Basic and lightweight toy drones are just perfect to sacrifice them in order to get used with the basic flight movements. Even $1000 drones are not perfectly safe, they can crash or bump into something causing significant damage.

Disclosure: I received this foldable selfie drone as part of a product review collaboration with Banggood. Although the product was offered as a gift, all the opinions in this review remain my own.

The package arrived in 22 days with regular shipping. Luckily the box was very small and does not stir up the curiosity of the customs. In my country, you need to pay customs fees and VAT even for cheap drones as 20 bucks.

Inside the box I found, besides the drone, a complete set of spare propellers (8 blades), Li-Po battery, USB charger, screwdriver, and user manual. No memory card included.

With folded arms, the fuselage measures only  8.1 x 6.3 x 4 cm and weighs about 63 grams. It fits perfectly in your hand or a larger pocket. The plastic from which is made feels a bit cheap but it is a usual fact for such toys.

At first look, I thought that Flytec T13 has no power button. After I unfolded the arms, I found the tiny push button on the right side behind the arms. Motors are aligned horizontally instead of vertically.

As I previously mentioned, the front props are above the arms and the rear props are below the arms.

In order to allow better visibility on the orientation of the aircraft during night flights, the Flytec T13 drone has white LEDs in the front and red ones in the back.

The 520 mAh Li-Po is loaded from the tail of the aircraft. The battery has no wires and can be swapped with a new charged one in just seconds.

As I received a BNF package, my only option to control the aircraft was through the Flytec APP. APP also is required to display the camera’s real-time image feed (don’t forget to enable 720P mode under the settings menu). 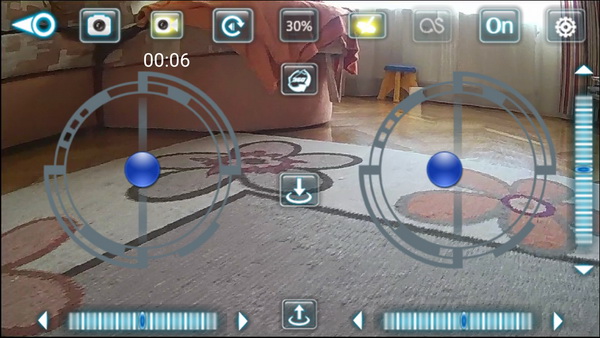 You can opt to pilot the drone through virtual sticks or through the smartphone’s gyro sensor by tilting the phone. The user interface is very simple and intuitive. You have dedicated buttons for Takeoff/Arming, Landing, Emergency stop, and Speed rate switch.

The APP allows some fancy stuff like “Path flying” and “3D VR mode”, but they didn’t convince me.

The 720P wide-angle camera is integrated and allows slight angle adjustment. WiFi FPV range is about 40 meters and it has a low frame rate and some delay. Anyway, kids will love to use it to spy on the neighbor’s dog.

Like the VISUO XS809HW, this T13 also features dual recording storage (drone and phone memory). Nice! Because usually “On-board” recording has much better image quality than capturing from the WiFi live-video feed. The micro SD slot is located on the rear part, right above the flight battery. 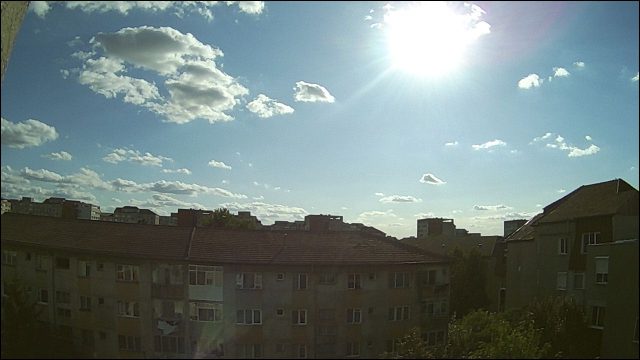 In daylight, the camera offers pretty nice image quality, especially those downloaded from the micro SD card. Colors are natural and the jello-effect is acceptable.

Being an old fashioned guy, I was a bit disappointed because I received the T13 without RC. I prefer more to pilot via transmitter than via smartphone APP but, times are changing and we have to get used to everything being controlled by your phone.

Pressing the “Arrow up/Take off” button, all the motors start to spin. In order to take off, you need to push-up the throttle stick. The altitude hold works very well but, without an optical flow sensor, it is slightly side flying.

I intentionally stuck one blade in order to check if it has over current protection but no, the motors continued to spin. This is not good.

When the battery is near empty, all the LEDs will start to flash. From this time you have about 30 seconds to return and safely land, after this grace time the aircraft will autonomously land on its actual position.

Should you buy it?

If you don’t have high exceptions from your first drone, the T13 can be found here for $40.99 with free shipping. You can also opt for BNF package (in a bundle with RC) for $48.99. Two-color options are available: white or black.