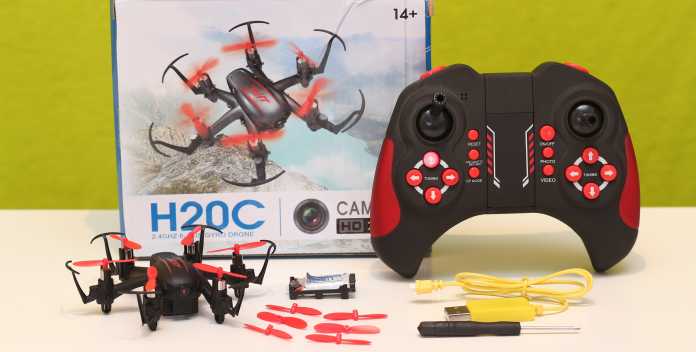 Somehow I missed to review the JJRC H20C ‘s predecessor, which was probably the first affordable mini hexa-copter. These two models have approximately the same design but the newer H20C is slightly bigger and comes with a nicer remote controller. Certainly, the most attractive improvement of the H20C over the older H20 is the onboard camera. The camera is advertised with HD 720p video resolution, but I have a hunch that the 1280 x 720 videos are obtained by software interpolation from VGA resolution.

Frankly, based on my experience with other cheap hexas, I can’t say that there’s a big difference between the four motor and six motor design. Actually, I find it useless to install 6 motors on such small aircrafts. Of course, I’m not talking here about the much more expensive hexa-copters like the Yuneec Typhoon H where the 6 motor design offers the capability to safely land even if one rotor fails.

This $40 mini hexa-copter is available in two color schemes, green/black and red/black. I received the red/black one which matches perfectly with the transmitter’s colors. Both versions have unicolor propellers, which makes it harder determining the orientation of this little aircraft. Surely, at this price it can be considered only a toy without having big expectations.

As I already reviewed few JJRC models including their X1 brushless quad, I can say that they offer decent quality and good aftermarket support through spare parts availability.

This product was been offered by Banggood in order to make a honest review. As usually, they didn’t request me to write my review in a favorable way. Thanks again for their professional attitude.

The small package arrived in 3 weeks and fortunately was unharmed, not totally destroyed as it happened with the RunCam Swift which I recently received.

Besides the small hexacopter and its stylish black/red remote controller, the package includes one set of spare propellers (3 CW and 3 CCW), USB battery charger, screw driver and something that should look like a user manual. Luckily, the propeller guards are “built-in” and requires no additional installation.

Having the size of approximately 10 x 10 x 2 cm, the H20C can’t be categorized as micro hexa-copter. Due to its size is just perfect for indoor fun as well as for outdoor flights in calm days.

The 280 mAh Li-Po battery, which is the power source of this H20C hexa, is easily removable and replaceable. Although the battery is equipped with the familiar micro-JST connector, it can’t be charged with other chargers because the polarity is reversed!

According to the specs, a fully charged battery allows about 5 minutes of playtime. Those who want to have more fun without having to wait 20 to 25 minutes for recharging the battery through a standard USB plug, can purchase a couple of spare batteries (it costs only $4.5/pcs.).

Peeking inside the H20C I surprisingly found out that the camera module is almost as big as the flight controller. Now, it is clear why the H20C is slightly larger than its predecessor.

Unlike other hexa-copters, this JJRC H20C has only 4 LED lights not six (one under each arm). There are two blue LEDs in the front and two red ones on the rear of the aircraft. An additional green LED is found on the camera module which indicates very well the rear of the H20C.

Although the control range is disappointingly short, the game console style transmitter looks pretty good. Every key is labeled with the corresponding function. 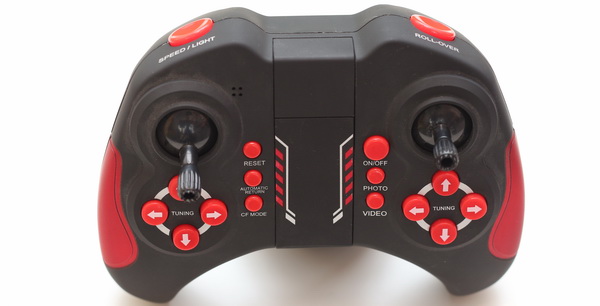 The foldable phone bracket is an indication that the manufacturer will launch soon a new model with FPV function (update: I just read that the H20W with WiFI PFV is already on the market).

Under the “power” switch are located the two camera dedicated buttons, one allows to stop/start video recording and the second one to take still images.

The left shoulder buttons allow to switch between three speed rates according to the operator flight skills (beginner, intermediary and insane). By long pressing the same button can be turned ON/OFF the LED lights. The auto flip mode can be activated with the right shoulder button (top-right).

Resetting the gyro can be done by pushing down the throttle stick and simultaneously pressing for more than 2 seconds the “reset” button.

The 720P camera is an integrated one and unfortunately does not allow angle adjustment. Both, photos and video are captured with resolution of 1280 x 720 pixels.

While the seller advertises the H20C with included 4GB micro SD memory card, I didn’t receive one. In order to make my tests I used a 8GB card from another quad. You should know that the memory card can be more easily inserted/removed if the flight battery is not loaded into the H20C drone.

Overall, the image quality offered by the camera is decently usable but not as good as other 720P cameras. When I checked the recorded video I had the impression that there are only 10-15 fps not 30fps as it is shown in the player’s media information. So don’t expected to capture with this toy an award winning aerial video :D

Yesterday, after I took the pictures for my review I proceeded with some indoor test flights. Contrary to my expectations for such a cheap model, the H20C was very stable and extremely easy to hover. As the left throttle stick retains its position, newbies can try to focus on the right stick and practice the basic flight movements.

When I took it outside I expected to be taken easily by the lowest breeze because the H20C is small and lightweight. Those tiny brushed motors (even if they are six) can’t fight with the wind.

Although the advertised control range is 60 meters I managed to fly about 30 meters far away from me. The motors are automatically stopped after 10 seconds when the transmitter is powered OFF or the aircraft is out of the control range.

The propeller protectors work well, so it can take “easily” a crash without major damages.

In my opinion, the LEDs are not positioned too well, they are clearly visible only if you are under the drone.

In my opinion, this JJRC H20C is a nice entry-level model. Excepting the short control range which is about 30 meters I was generally pleased by this hexacopter. Regarding the quality of the camera I did not have high expectations so I can not be disappointed either by its mediocre image quality.
As I hate to use heedless mode, in order to have a clear view about the orientation of the aircraft, I will paint the two rear props in a different color.
I highly recommend it for newbies as first multi-rotor.

Those who are interested to begin their journey in the world of quadcopters with this remote controlled toy should know that it can be ordered on BG website here. There are also available spare parts in case you need to replace one of the motors, flight controller or camera.