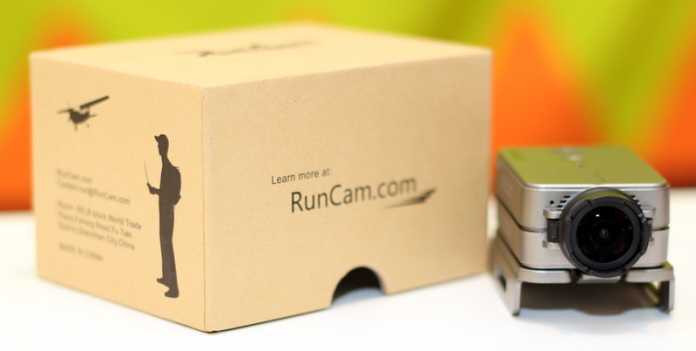 It would be nice to make a side-by-side comparison between this RunCam 2 and the GoPro Hero 4 Black even though I know these two are from different league and are mainly designed for different applications. Meanwhile the RunCam cameras are designed for RC enthusiasts the GoPro products are for extreme sports fanatics.

Few month ago I received the RunCamHD  for review, which proved to be a nice light weight FPV camera. I had only few complains regarding this older model which mostly seems to be remedied by the upgraded model.

I’m planning to test this RunCam 2 camera together with my new Runner 250 Advance racing quadcopter because I think they will make a perfect pair. I am very frustrated because of the bad weather that lasts for 3 weeks now so I didn’t have the opportunity to flow it outside yet.

First of all. I have to thank Min from RunCam who offered me this camera for review. The box was marked as “sample” and it is possible that the final version of the product will have some minor changes. BTW, the camera was listed for order only starting yesterday (Dec 09 2015).

I received the silver version of the camera but, unlike its predecessor, the RunCam 2 is also available in crispy orange color which is nice because it makes it more visible and easy to find when you accidentally lose it in the flight field.

The camera comes in the same simple but stylish carton box like the one we are accustomed with from RunCam. Fortunately, the package contains much more accessories than the previous model. Lack of a lens cap was the only negative thing for me, because that tiny inexpensive piece of plastic can protect the lens from scratches during transportation.

Included with the RunCam 2 camera

At first sight, the RunCam 2 has a very good build quality and it looks extremely nice especially when is turned ON thanks to the bright status LEDs. Having the size of 66 mm x 38 mm it is slightly bigger and 8 grams heavier than its predecessor. Unfortunately, because it has a different footprint than the earlier model, the camera’s base (mount) is not interchangeable.

The recorded videos and captured photos are stored on a micro SD memory card which can be up to 64 GB. I recommend to use class 10 type cards to handle the average 34 Mb/s video bit rate. The micro SD slot is behind the battery compartment door, this way the memory card is protected from sliding out in case of crash lands.

There is a cool circular LED around the “Power” button which is glowing in different colors according to the status of the camera:

RunCam 2 has a nice OSD menu which allows to fine tune the camera settings and also set the desired video formats.

This camera is designed mainly to be used on remote controlled aircrafts but, thanks to the loop recording and auto start recording features, the RunCam 2 can be used as well as dash cam in your car. BTW, it is also capable to take photos in JPEG format with 2304 x 1728 pixels (sample photo).

Instead of a built-in battery the RunCam HD2 comes with a replaceable 850 mMa battery, so when needed you can have always a charged spare one ready to use. With a fully charged battery it has up to 90 minutes operation time (greatly depending on the selected video format). The battery can be recharged using the included micro USB cable via any USB charger or computer USB port.

The camera can be also powered from the aircraft’s main battery through the included micro USB to AV-out cable. It accepts wide range of input voltage, can be feed from 5 V to 17 V (2-4 s LI-PO batteries).

Through the RunCam 2 APP, the camera can be remotely controlled and configured. Using this APP you can set the video format, enable the slow motion and time lapse mode. In order to secure the camera from unauthorized access, both WiFi name and password can be changed. In case you forget your password, it is displayed via AV-out in the time you enable the WiFi connection.

Usually I go to work on foot and I decided to do a quick test of the camera this morning. Frankly, I was a bit disappointed. In low light condition both videos and images were almost unusable. Definitely, for night FPV races I will need a dedicated TVL camera like the PZ0420M. On the way back home in good light condition the camera behaved much better offering very sharp videos.

In order to test the advertised 60 ms video out latency (at 1080 p), I performed a quick test using a tablet with a stopwatch APP and a FPV screen. After 60 seconds I got about 65 milliseconds delay between the real time image and FPV out image. My testing “tools” are probably not the most accurate, so the 60 ms looks pretty plausible. Not bad, but probably I will keep the 800 TVL FPV camera on my Runner 250 and add this RunCam2 as additional camcorder.

After few tests I noticed that RunCam 2 has a very good response on light condition changes, which is very important when is being used on racing quadcopters. The high frame rate is a must have for those who want to make some cool slow motion videos. The included adapters (tripod and GoPro) allow wide range of usability and can be easily installed on a remote controlled aircraft, helmet, bike or car. For those who need an ultralight camera with 1080p@60 fps video resolution, this RunCam 2 looks to be a great choice. Everyone interested in buying this cam should know that it can be ordered directly from the manufactures website here.

Images with the RunCam2 quadcopter camera

The manufacturer announced the RunCam Firmware V2.0, with the following updates: